This last weekend I got the chance to spend a couple days on one of my favorite Ozark trout streams with a few good buddies. This particular river I hadn't fished in almost a year , too long away from what used to be one of my favorite weekend haunts. We weren't real sure what to expect from the weather or the fishing but that's pretty much always the case I guess. The important thing was that we were getting away to spend a little time on the river together for the first time in too long.
Joe and I left KC early Friday morning with plans to meet Bryan (The Rogue Outdoors)at the campground around noon. Kevin(On The Fly) would meet up with us later that evening after he got off work. Joe and I were the first ones to arrive and we got our camp set up and ate a quick lunch while we waited on Bryan to show. With camp set up we rigged the rods and headed to a downstream access to fish out the afternoon or at least until we got too damn cold to fish. The sun was out but the temperature didn't make it above freezing that first day and there was at least a twenty mph wind gusting all afternoon which made things feel a little brisk. 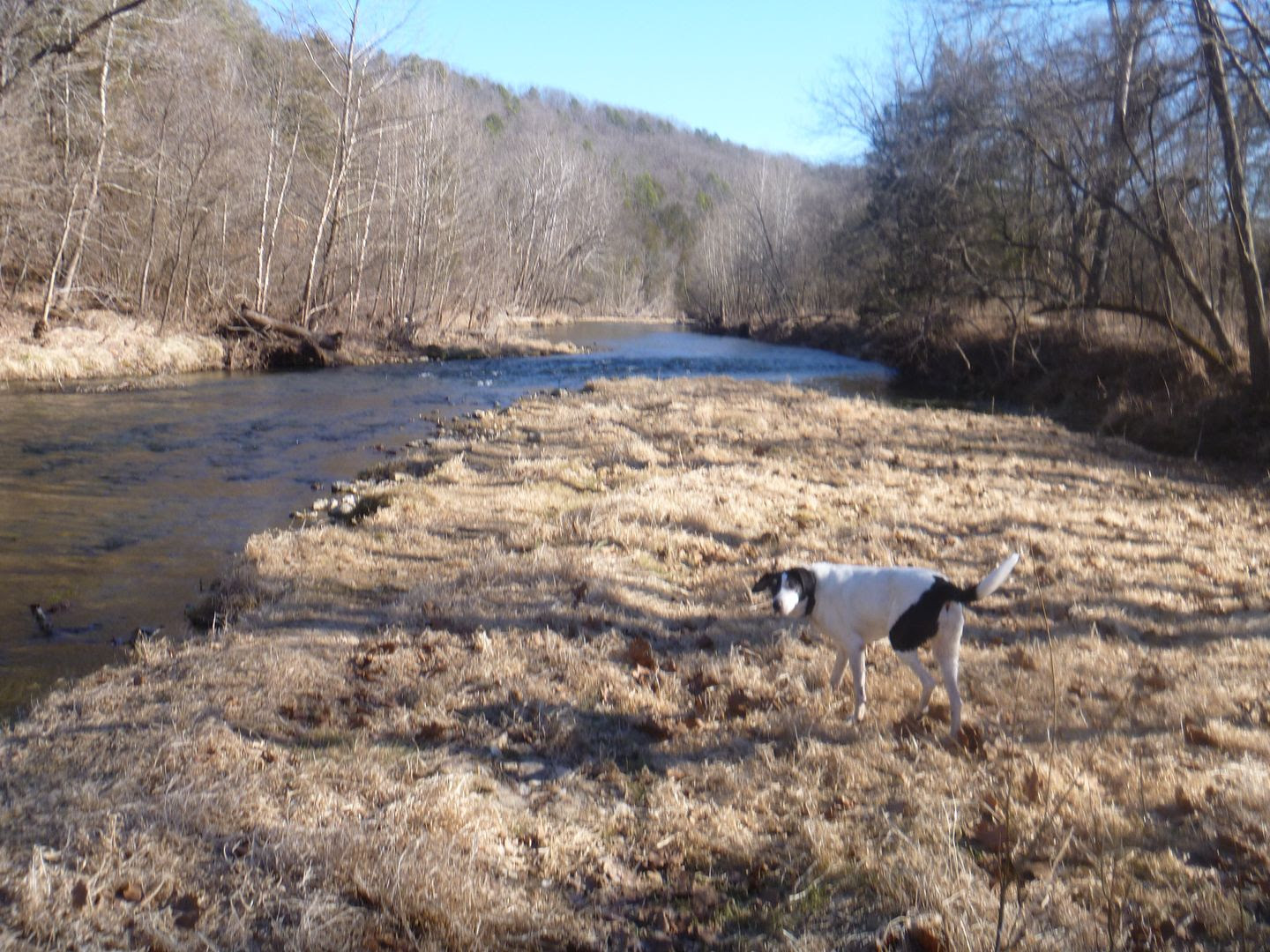 To our surprise we found the stream mostly empty that first afternoon , the one upside to Mother Nature not showing her best side I guess. We nymphed a long section of stream for the majority of the afternoon and caught respectable numbers of small rainbows. I didn't stress out over what the fish were doing too much , a heavily weighted caddis pattern followed by an egg dropper was my first choice and I didn't bother changing it up as the fish seemed to approve. 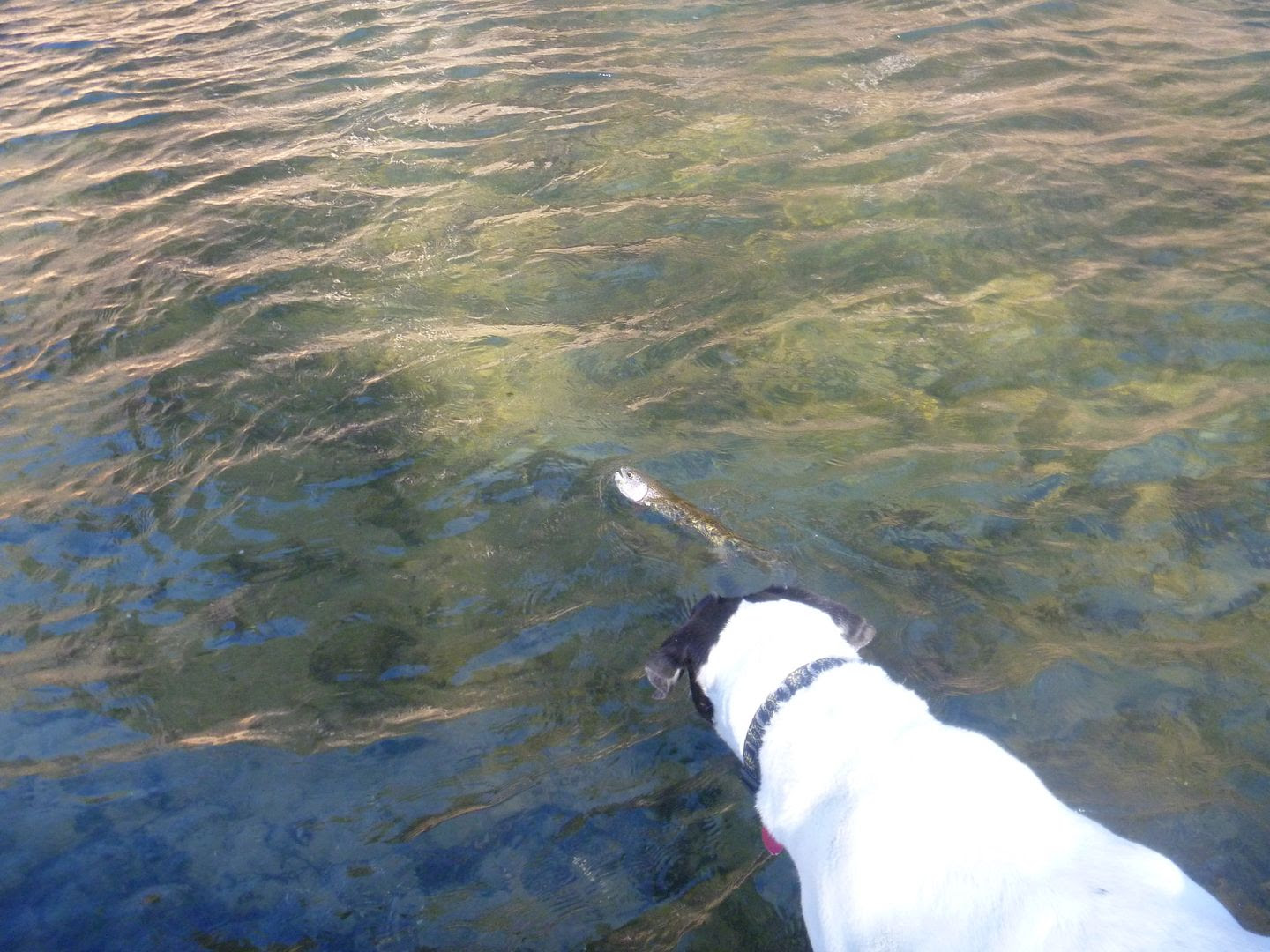 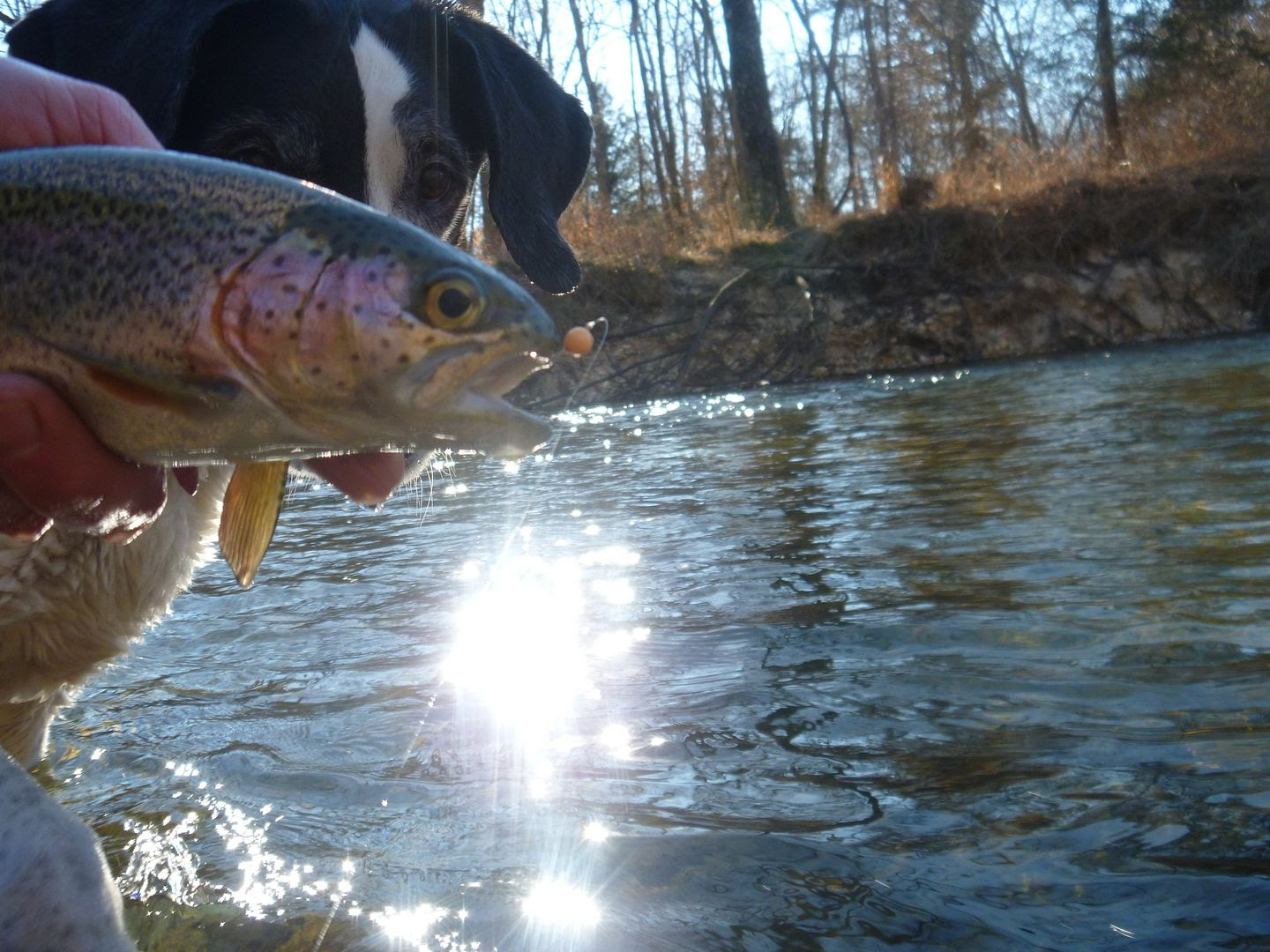 The last hour of the day we tried our luck at a little streamer chucking just downstream from camp. Several chases , one good eat , but no browns to hand unfortunately. We still enjoyed the hell out of it and decided right then that tomorrow evening we'd drag out the streamer rods again. 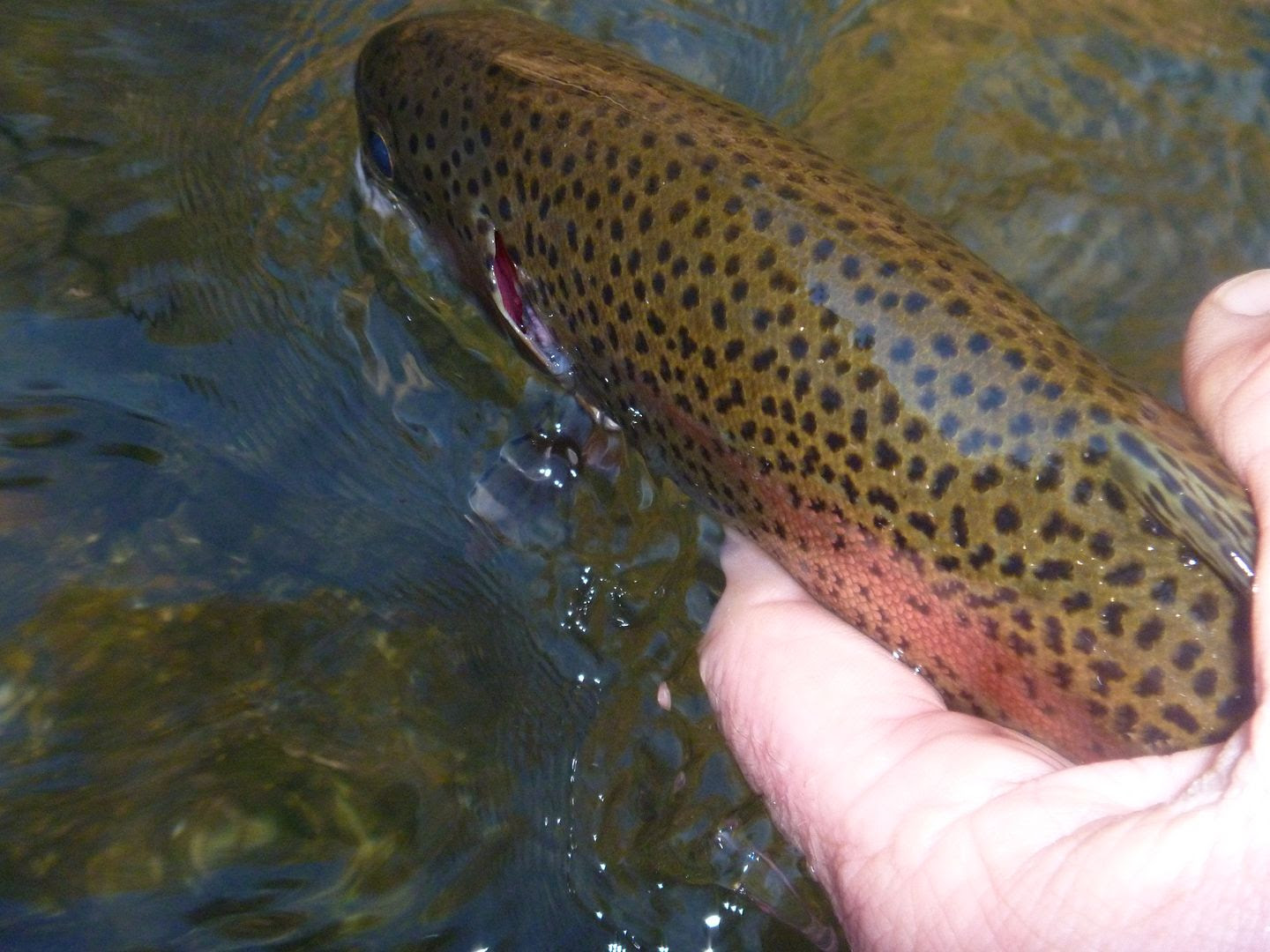 Kevin had a big fire blazing by the time we got back and it felt damn good to warm up those cold digits after a long afternoon. 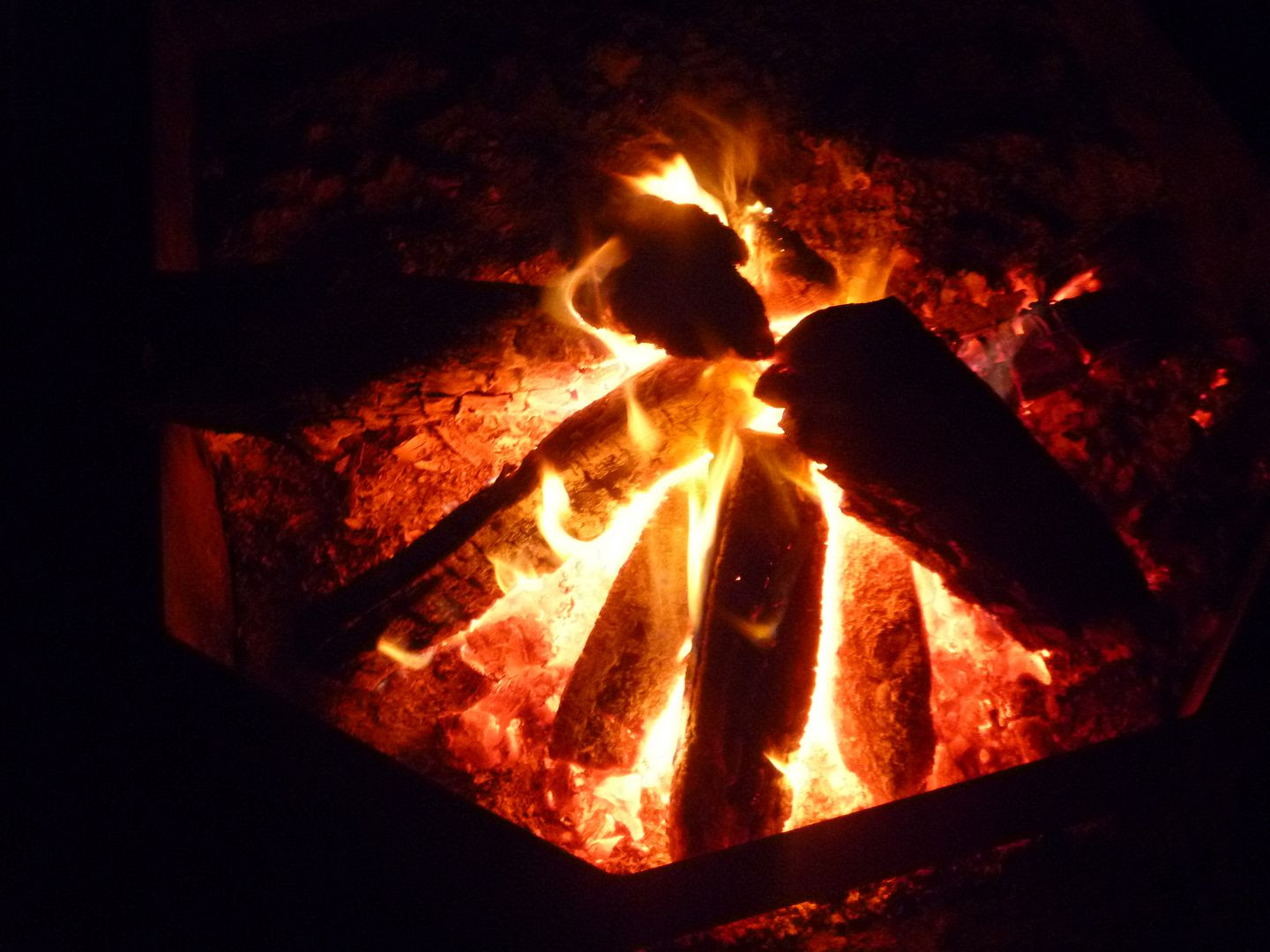 Dinner duty was mine tonight so after a quick warm up and some re-hydration I threw some smoked brisket on the griddle and heated up a pot of baked beans. A container of store bought cole slaw and a cold beer added to the mix and it hit the spot pretty well. 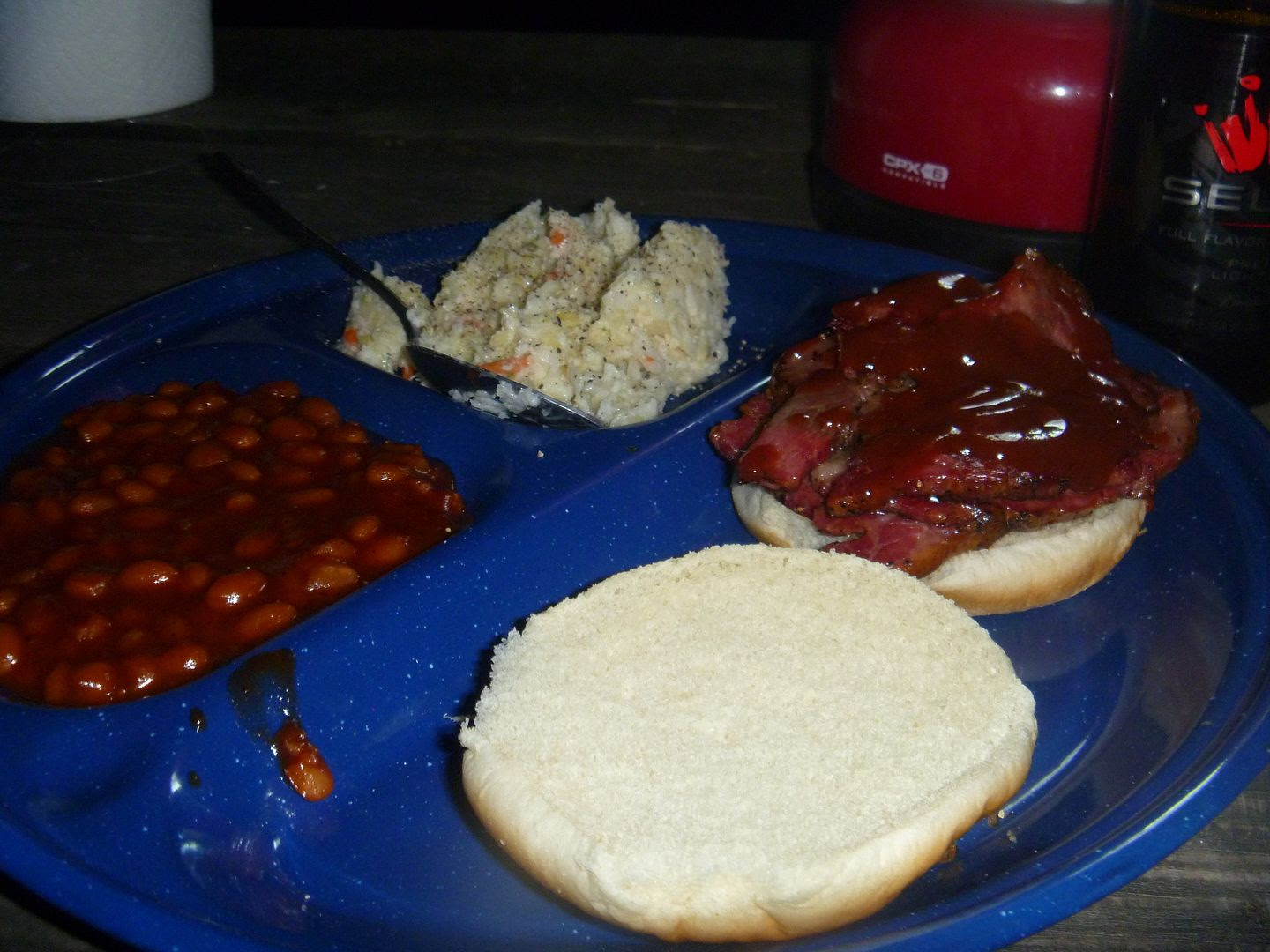 The rest of the evening was spent watching the steam roll off the ends of our boots , drinking a few beers and even sipping a little scotch to keep our innards from freezing. Good times with good friends.... 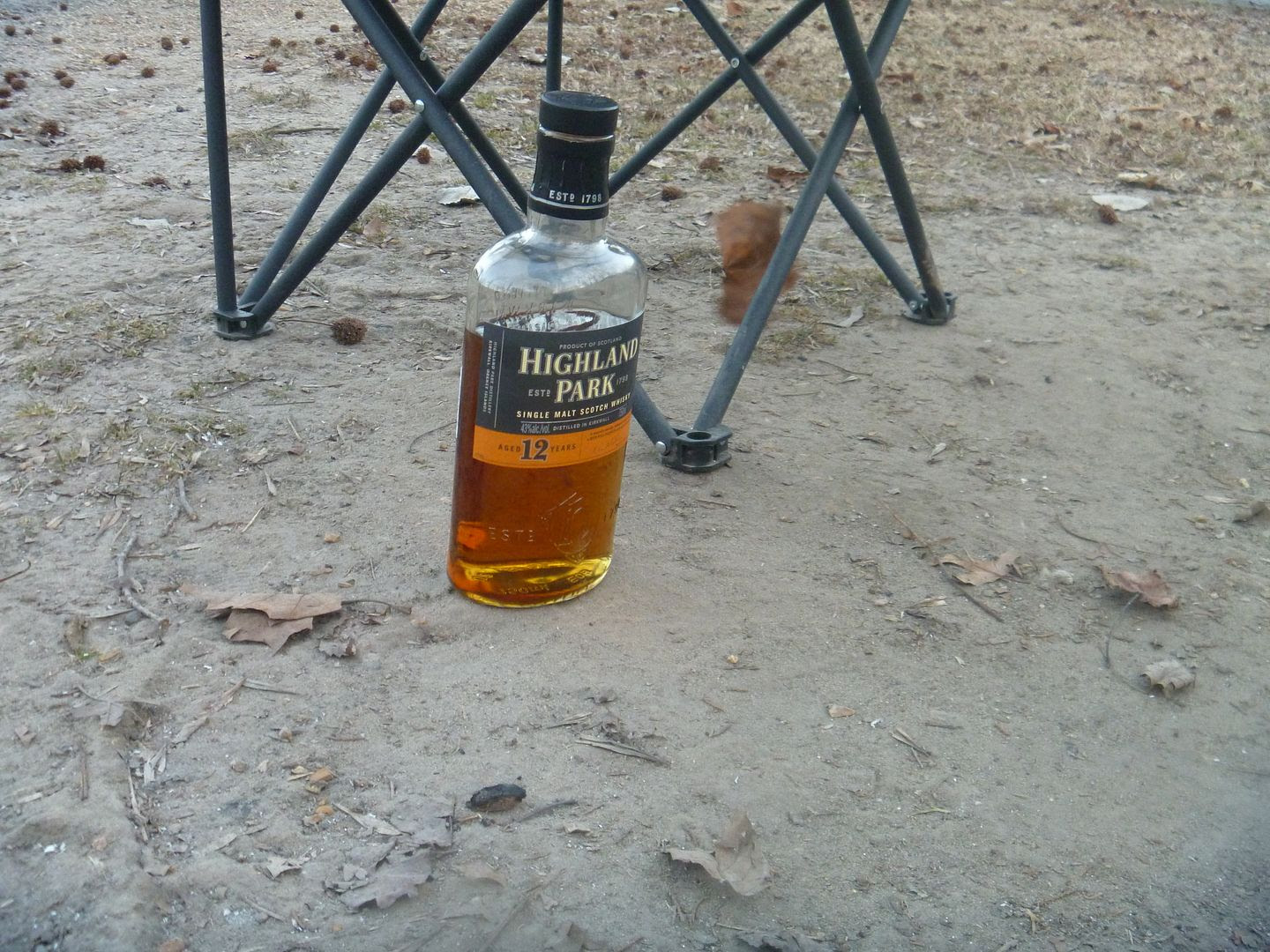 A homemade breakfast sandwich , a cup of coffee and we were rolling again in the morning. Joe and I in one vehicle and Kevin and Bryan in another (I told Joe that "wet dog smell" was an aquired taste and I wasn't sure that they had developed quite the level of appreciation that I had). We hit a different access to start off the day and did the nymphing thing again. 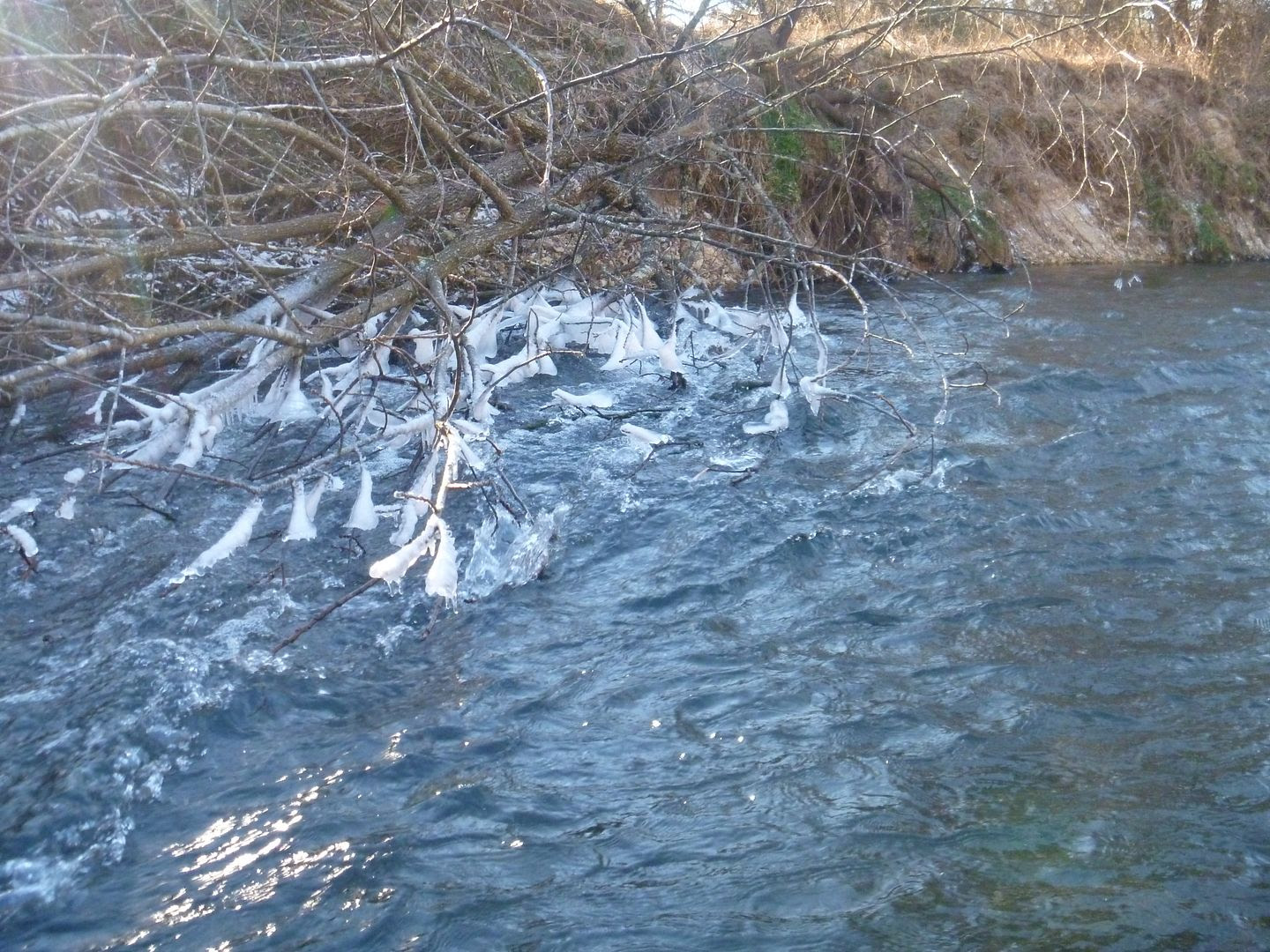 Fish were caught by all of us as we worked our way downstream , plying each likely spot with our wares. I wasn't able to catch anything of any size but a few pretty little bows were still enough to make the morning. 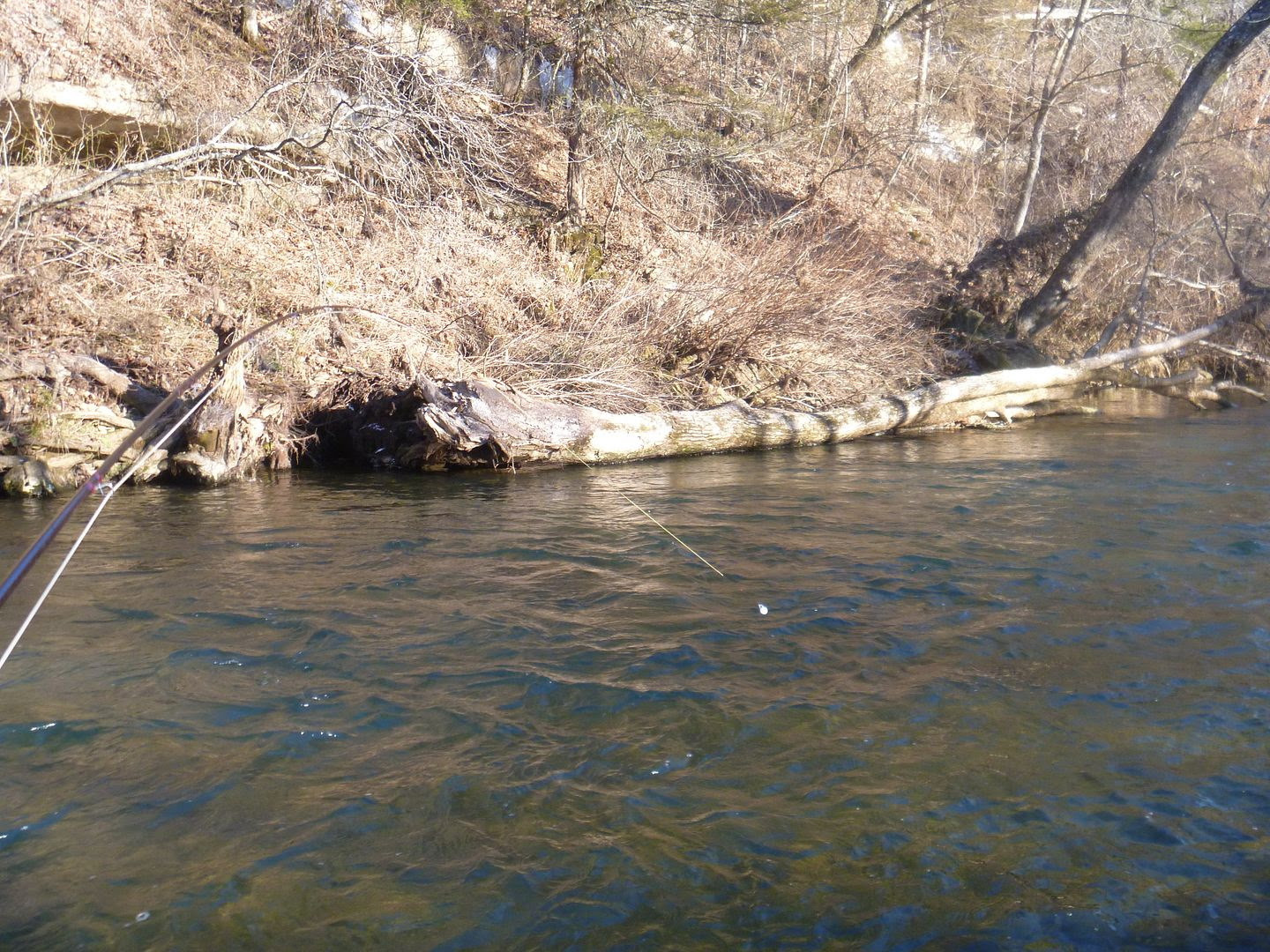 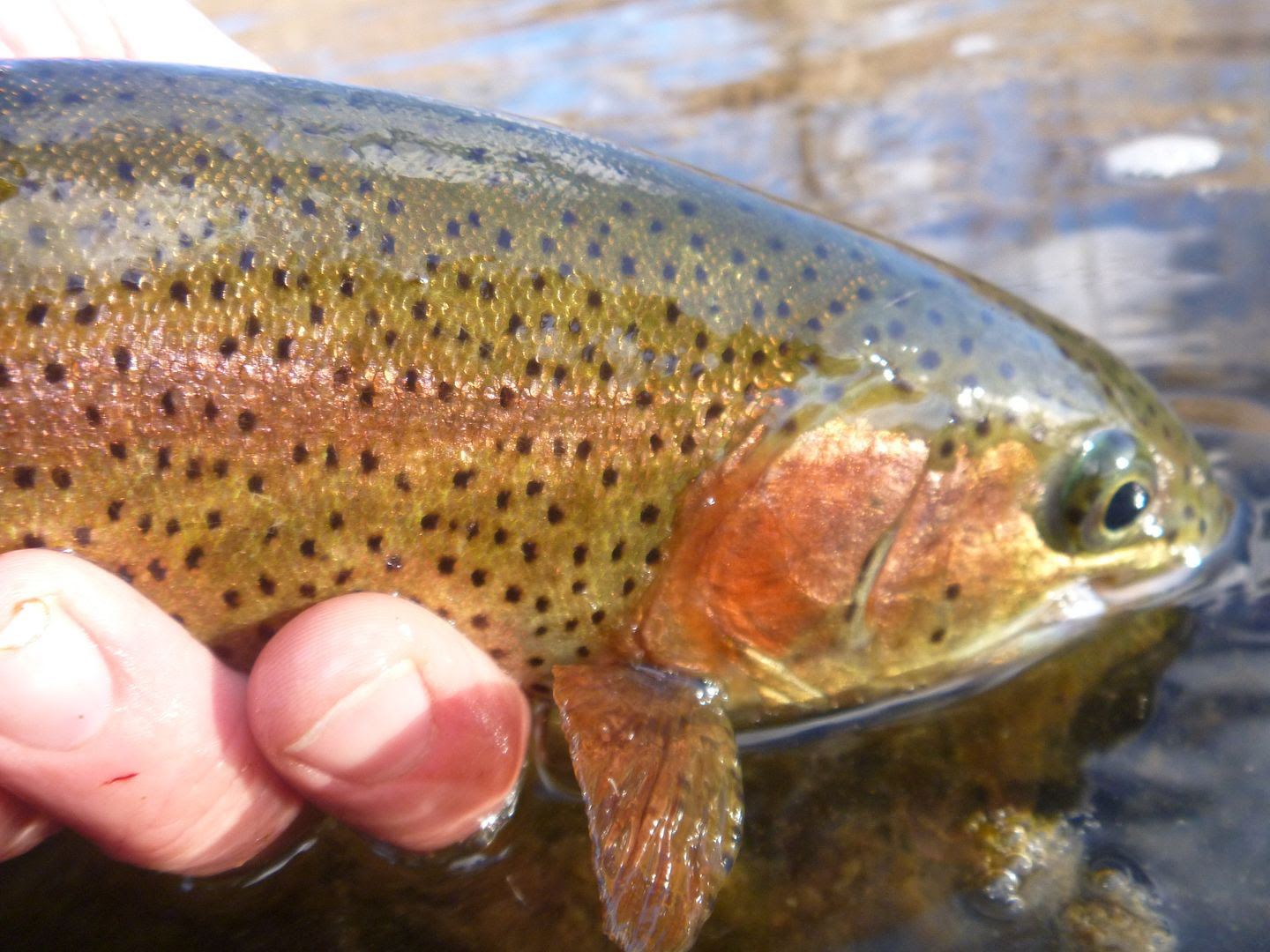 The real highlight though was when a pair of canoes came around a corner and the guy in front starts saying "I know that dog , that's Joe!". They pulled over and we introduced ourselves , Joe included , and then we proceeded to talk fishing. Turns out they all followed the blog and it was really enjoyable to spend some time chatting with them. Just another perk of fishing with a celebrity like Joe! 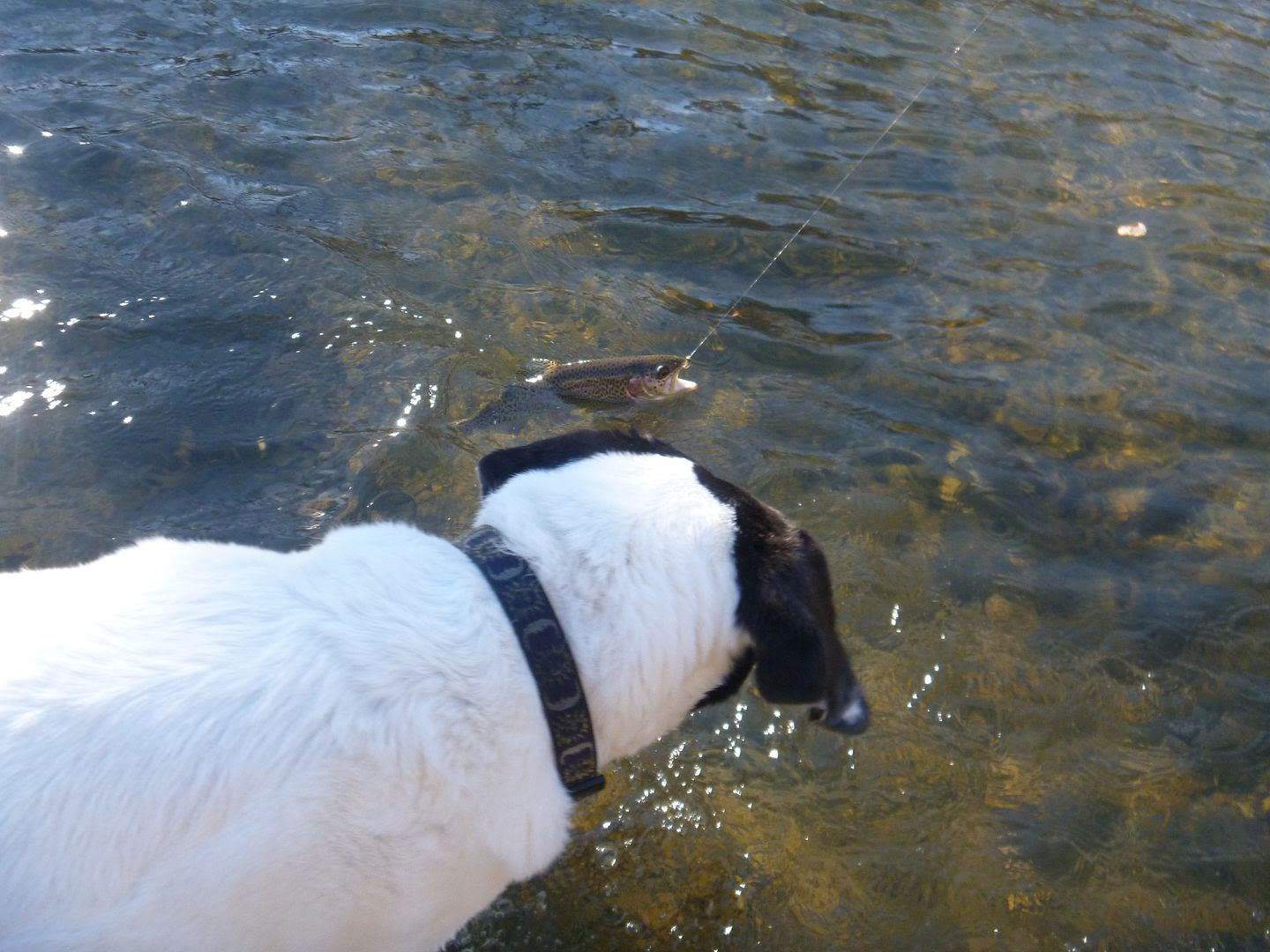 Joe and I took a little break after our streamside lunch and didn't fish too much until the evening streamer session. 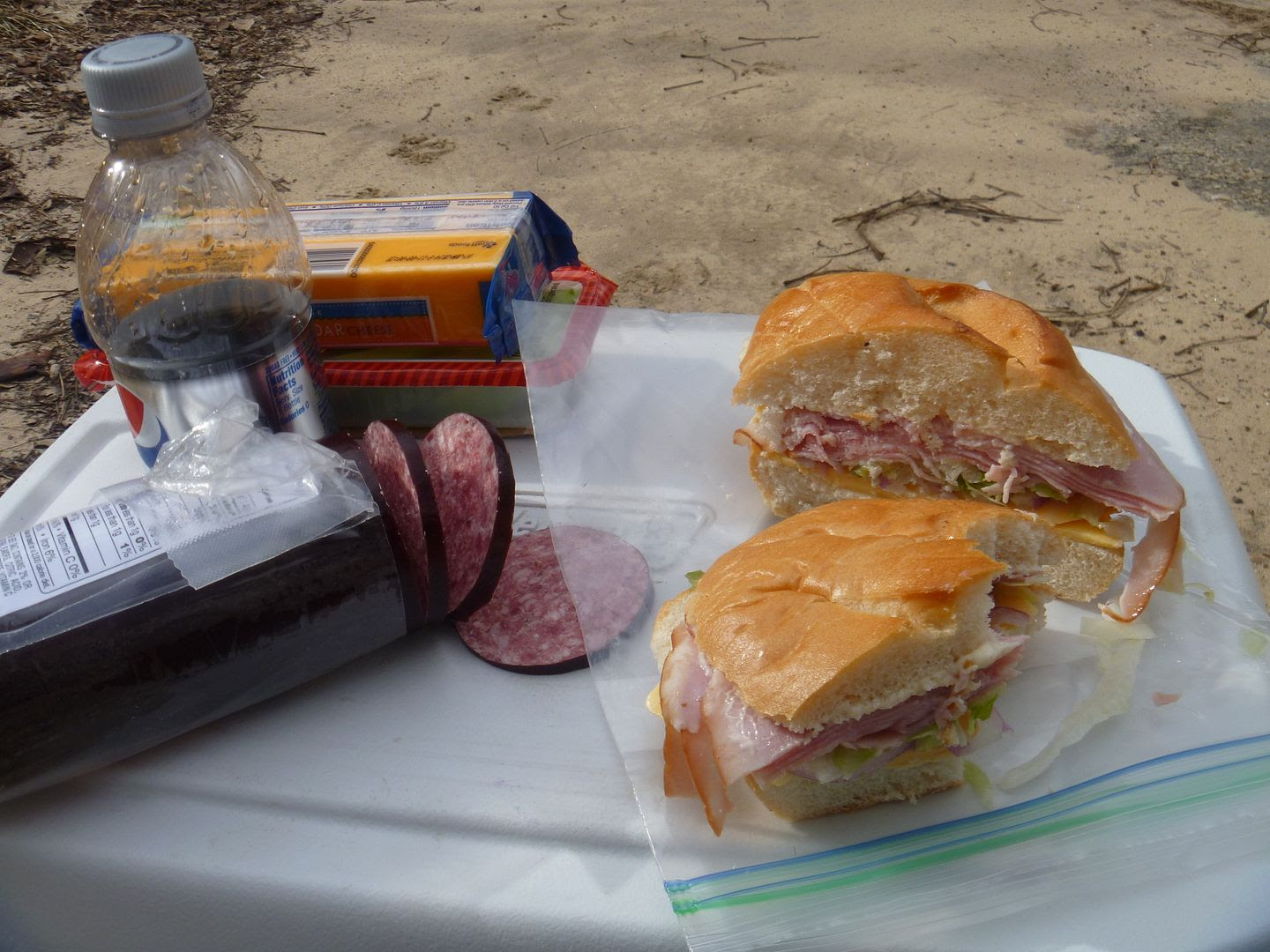 I was content to watch my two compadres fooling fish in hopes that I might learn something and Joe seemed pretty happy in the warm backseat! Bryan and I headed out with a couple hours of light left with plans to throw some streamers again until it was too dark to see. Kevin decided to hang out at camp and build another fire so he could get started making a big pot of chili for the nights dinner.
We gave it a valiant effort again , Bryan caught one small brown and I fubared two good eats fronm respectable fish. I can't even look at one of those B10s hooks without getting stuck , I don't know how in the hell one good head shake can dislodge ole Mr. Brown. We hiked out the last half hour in the dark with our rods taken down to keep from breaking something.
Cold , tired and a little bloody from the numerous thorn bushes we had encountered on our hike out , we stumbled back into camp to warm our bodies by the fire. The chili hit the spot and after washing it down with a couple cold beers it didn't take nearly as long on this second night before talk of hitting the sleeping bags made it's way into the conversation. Neither Joe or I had any arguments with retiring to a warm tent and a comfortable bed , it'd been a long day for these two old men. 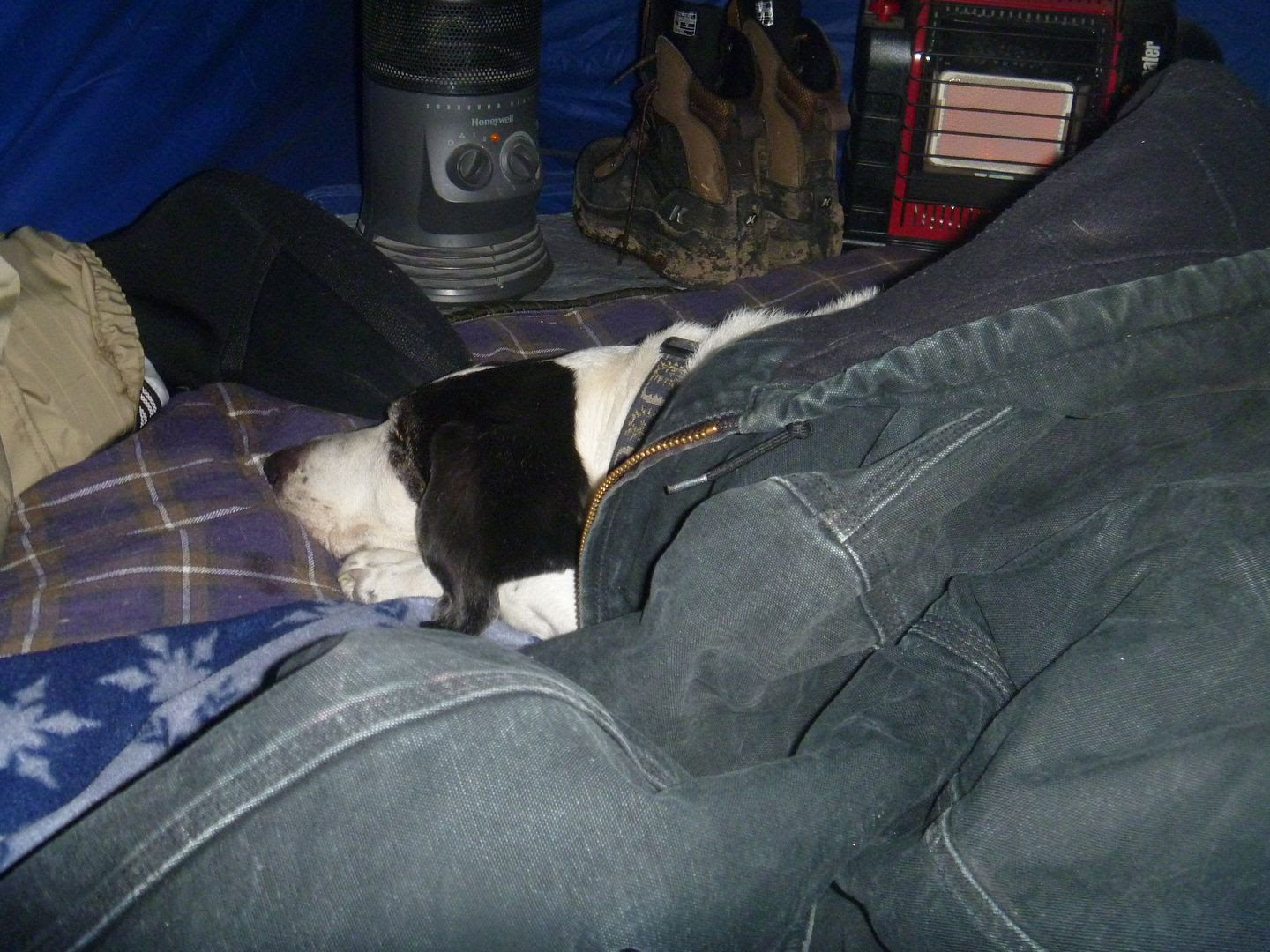 Sunday was packing up day and of course it was a frosty cold morning. Kevin was the first to get loaded up and he didn't stick around to fish , deciding to just head home instead. Bryan and I decided to make a little drive and hit one of Missouri's Blue Ribbon creeks for an hour or so on our way home. It was Bryans first time fishing one of these little creeks and I wanted to see him catch at least one fish so I left my rod in the truck and did some spotting for him instead of fishing myself. 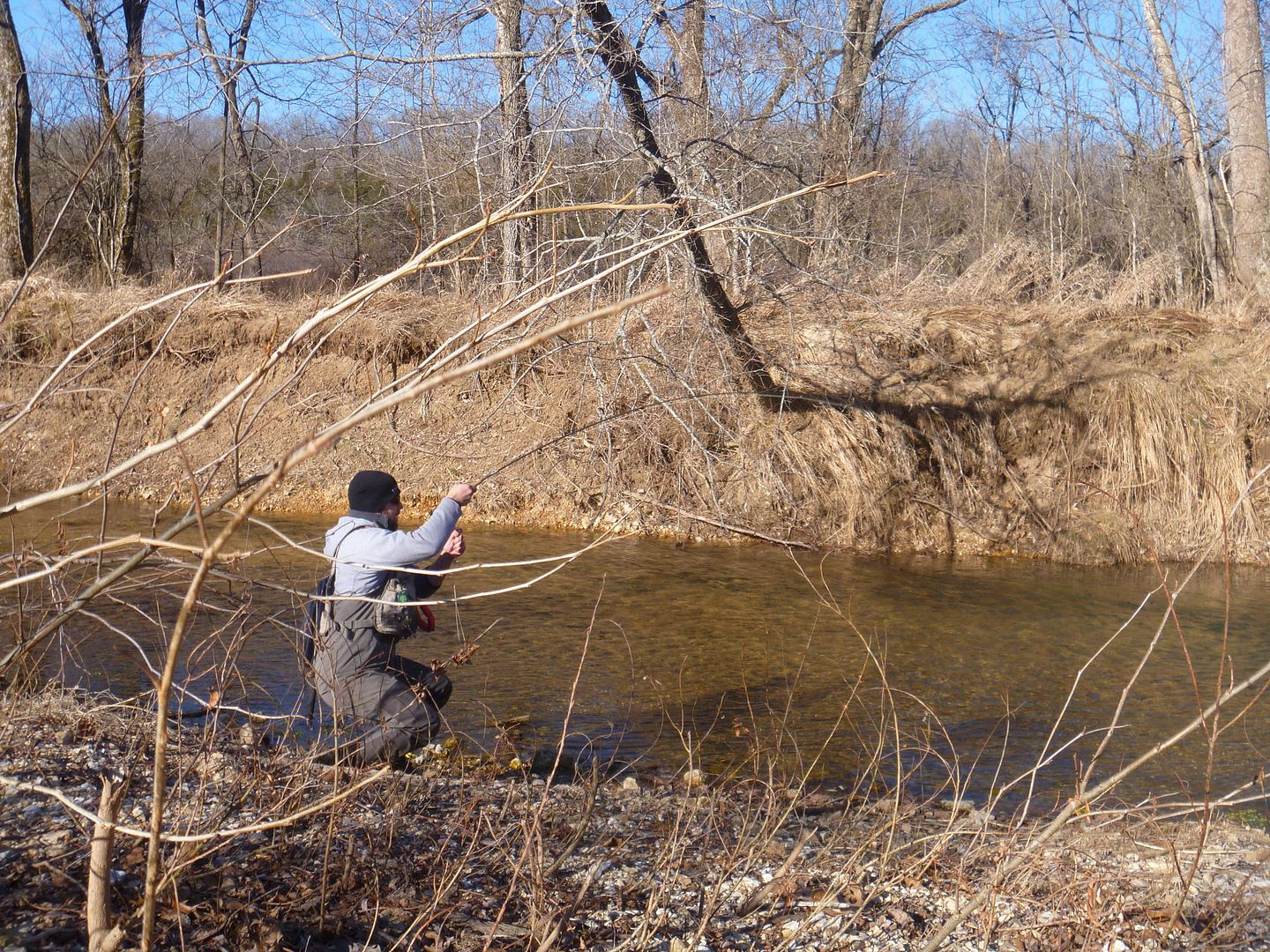 We were able to sight a few fish and Bryan landed one and hooked another fish briefly. Not bad for the hour or so we had to spend and I'm pretty sure Bryan was thoroughly thrilled with his first wild rainbow from Missouri. 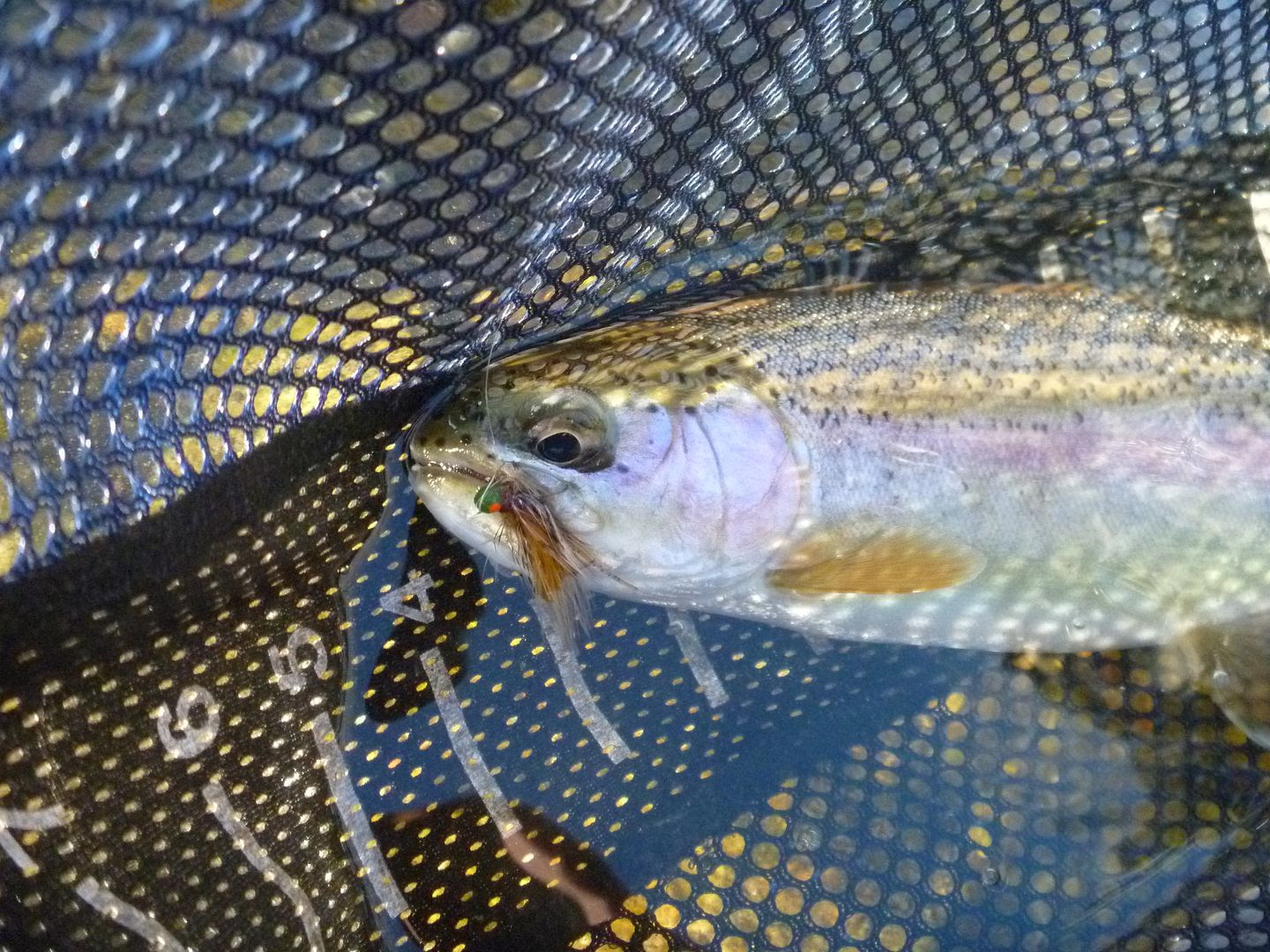 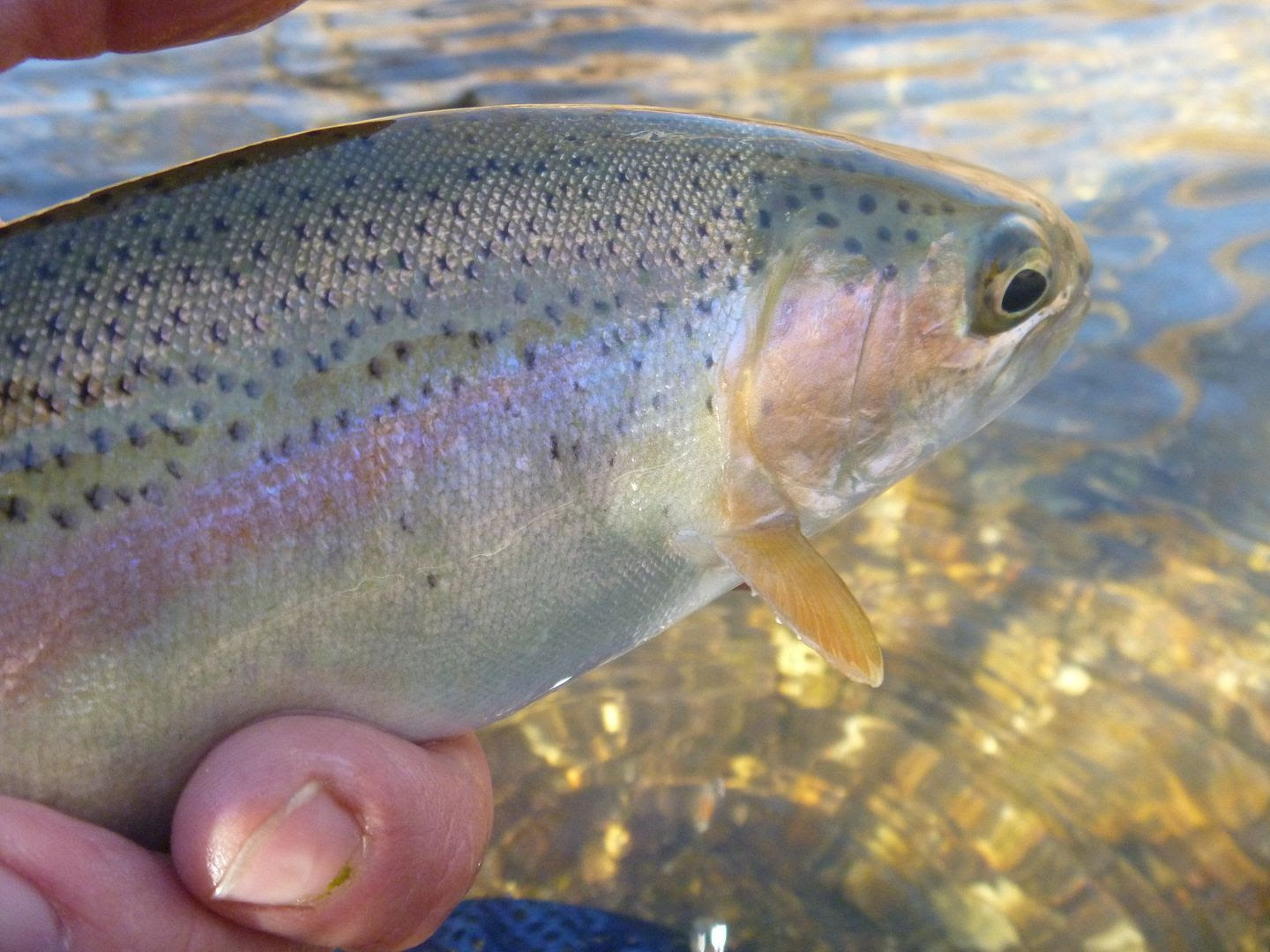 As we walked out towards the vehicles we both decided that we couldn't think of a better way to end another great weekend. 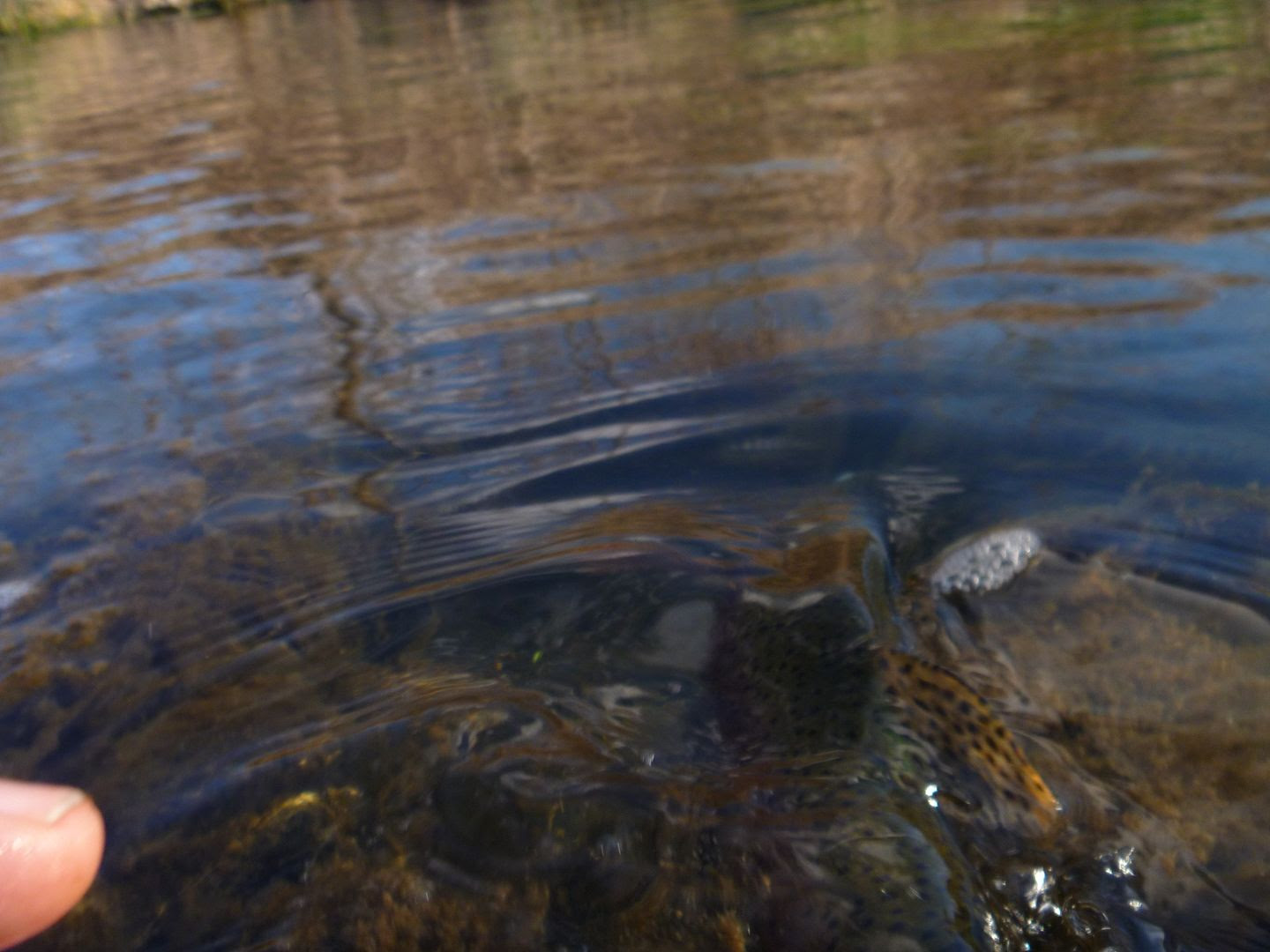 ** I know this is a week late in getting posted but I've been battling a flu bug ever since getting back from this trip. I missed a week of work and honestly am just now feeling up to even getting online let alone creating a post.**