Spey Rod White Bass...The Most Fun You can have with Your Clothes On!! 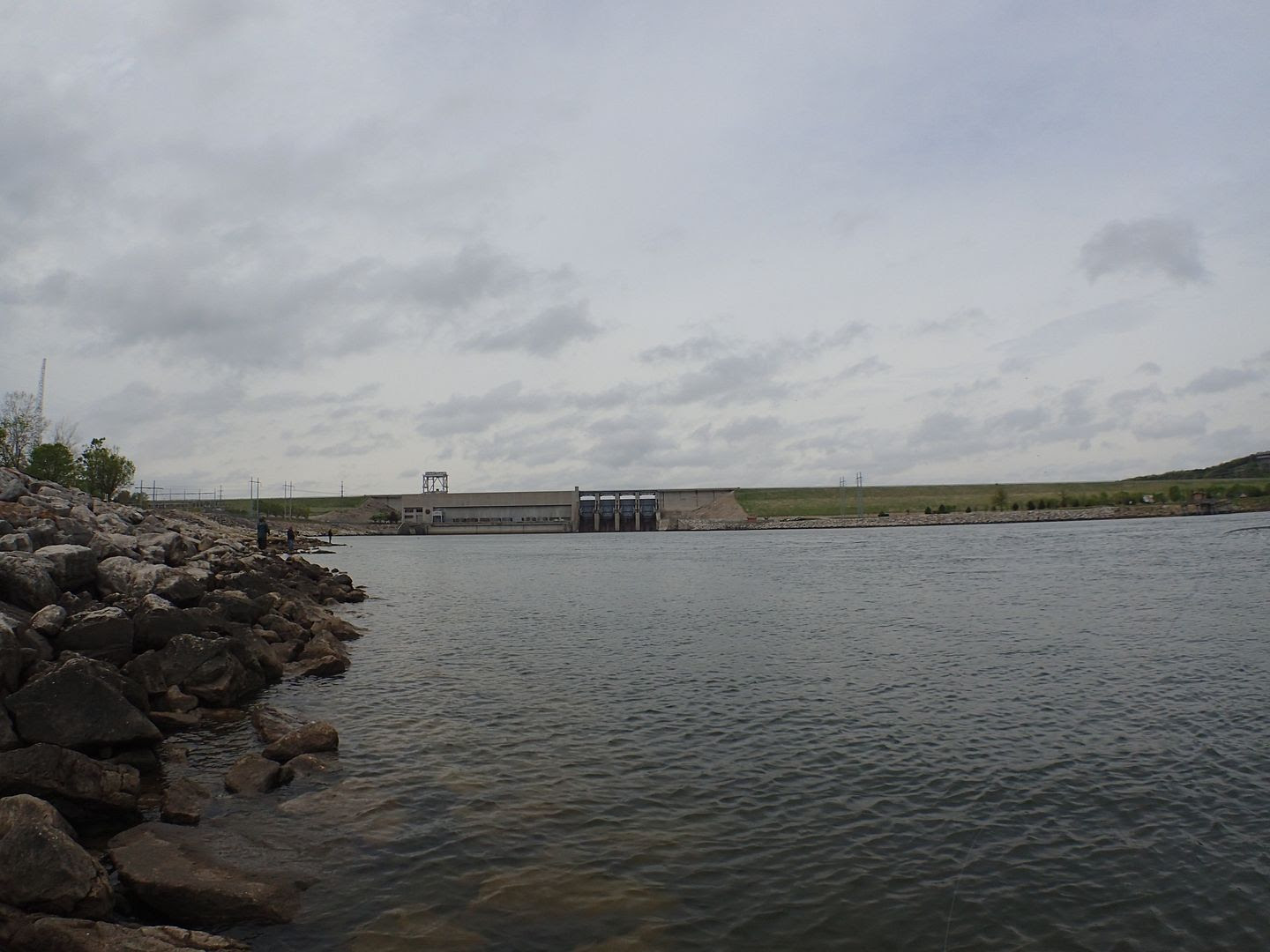 This last weekend was my third attempt at chasing white bass this Spring so far. Of the previous two outings , one was a total bust (as in skunked , never even had a bite) and the other attempt produced three fish (all about 10 inches long). I don't claim to be an intelligent man, especially when it comes to fishing...apparently two beat-downs just wasn't enough for this old guy so I decided to venture out this past weekend and try my luck again.
Several things lined up favorably that culminated with me making the decision to give it one more shot. First off it was a rainy , stormy day which in my experience never hurts when chasing white bass or hybrids. Secondly, when I looked at the generation schedule for the tailwater I was hoping to visit I saw that they were scheduled to run decent water for a good part of the day. And last but not least , I simply couldn't find anyone who wanted to go hit one of my favorite smallie rivers with me.
I wanted to drag Joe along as well but he's deathly afraid of thunder and lightning , cowers in his bed like a little puppy when a storm rolls in. As much as I would have enjoyed his company I didn't want to subject him to sitting in the backseat of the truck feeling scared while the days storms rolled through so I decided to just go solo on this trip. I awoke before the sun made it's appearance and the first thing I heard were the raindrops hitting the gutter outside my window. The truck was already packed and ready to go so I wasn't about to let a little rainstorm keep me from fishing...but an hour later start wouldn't make any difference on a rainy day either so I rolled over and went back to sleep. By the time I arrived at my destination it was around 10:00 , considerably later than I had planned on but I was hoping the low clouds and rain would keep the fish on the feed all day. 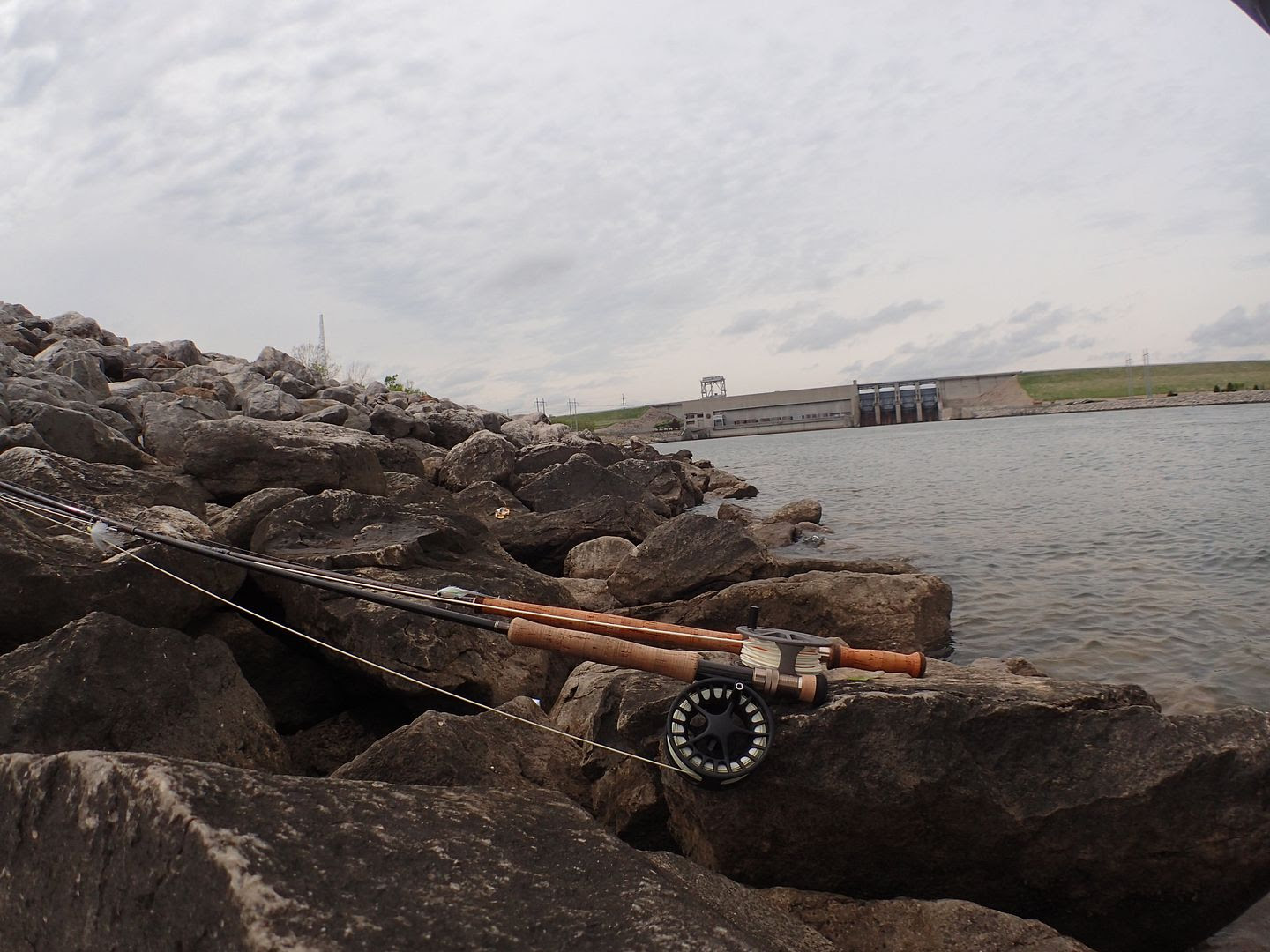 I had heard reports of some fish being caught so I was kind of surprised to find the banks relatively void of fishermen. There were a couple of die-hards toughing it out in the rain but not enough people to make me think the fish were actually biting. This was starting to look more and more like the last two wild goose chases I'd been on...oh well , at least I was fishing and not at work. That's always enough to bring a smile to my face!
After donning the rain gear and rigging up a couple of rods I headed down to the water to see if anyone wanted to play. 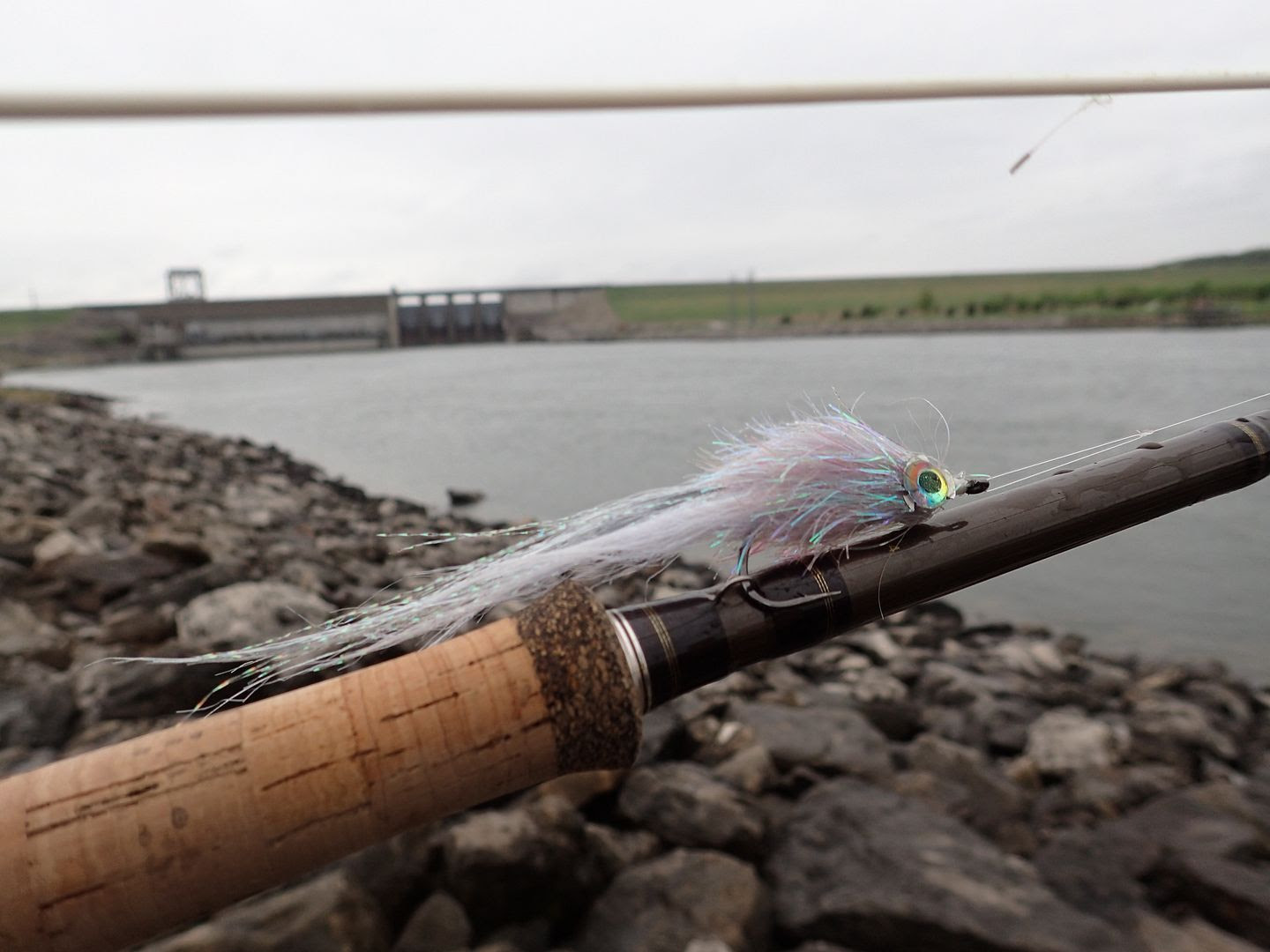 To my great surprise I hadn't made more than a half dozen casts when the first white bass of the day decided to eat my baitfish imitation. Not a big fish , but bigger than anything I'd tied into on the previously mentioned trips so it was a start. 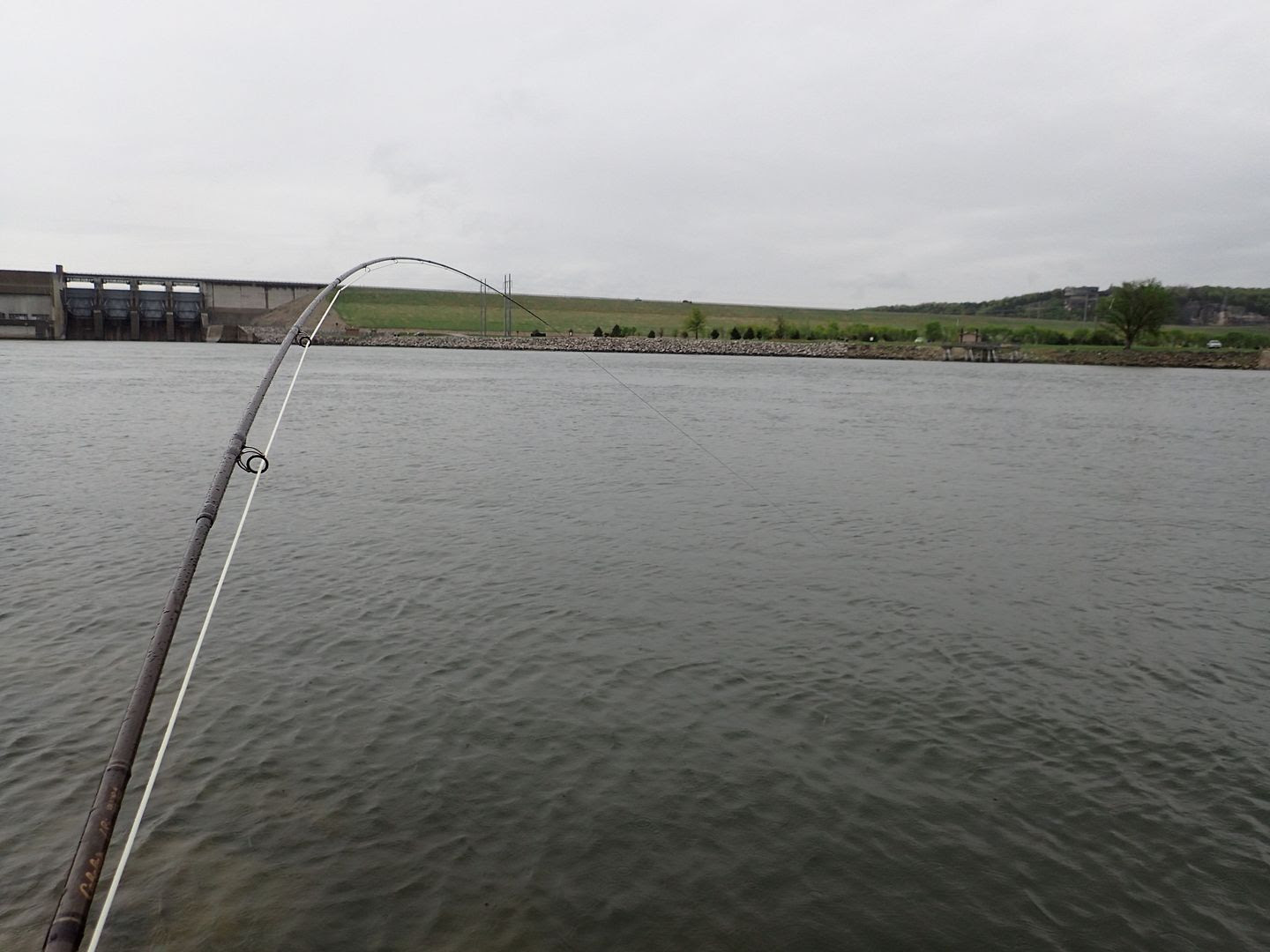 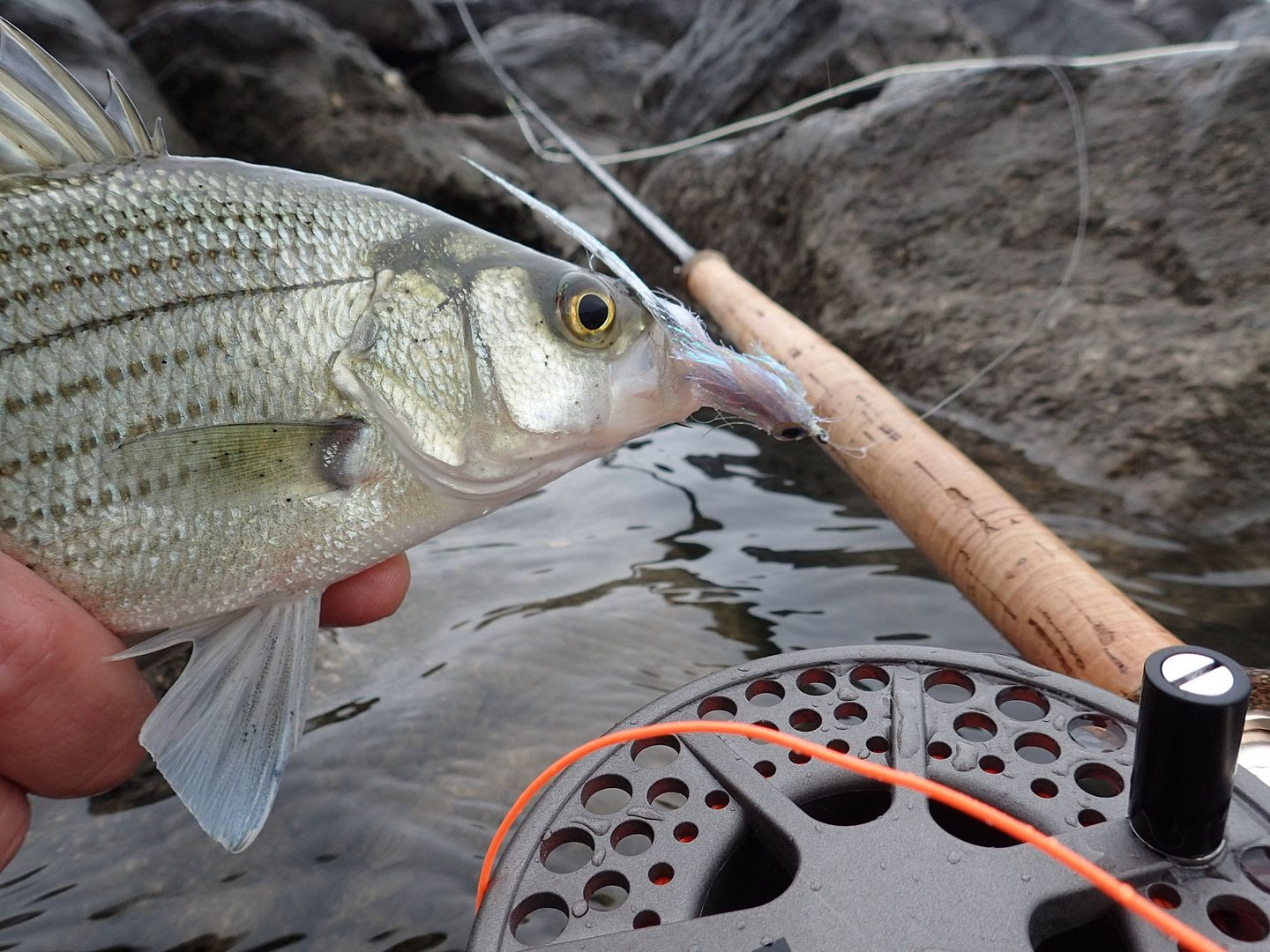 Several casts later fish number two was in my hands and from there things just got better as the day went on. I was using the 7 weight spey rod and have to say it worked great for that type of fishing , long casts were required to get to the fish all while standing on a rock rip-rap with zero backcasting room. This was just one of the situations I had envisioned this rod shining in and I was ecstatic to finally be able to make it happen. 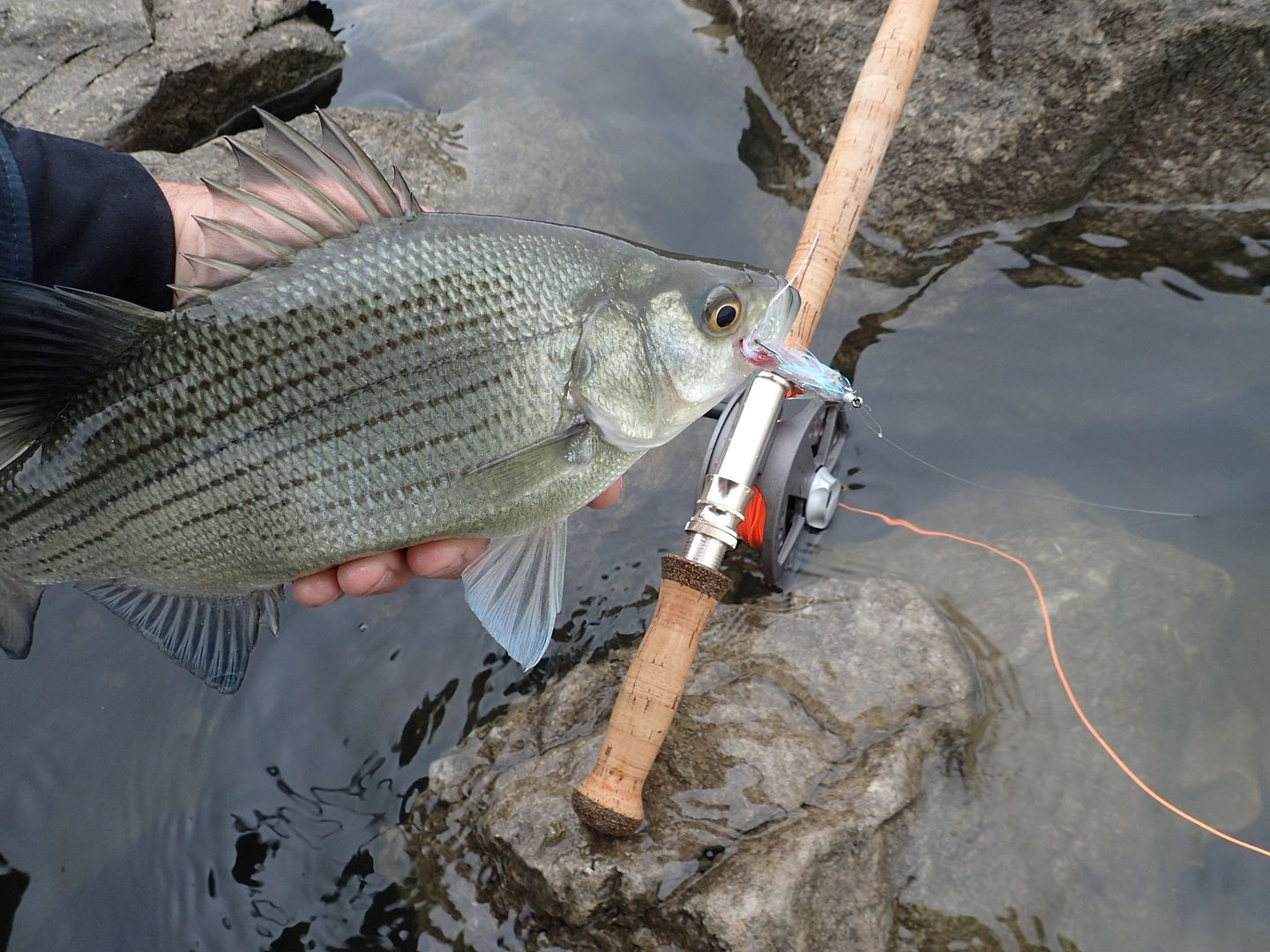 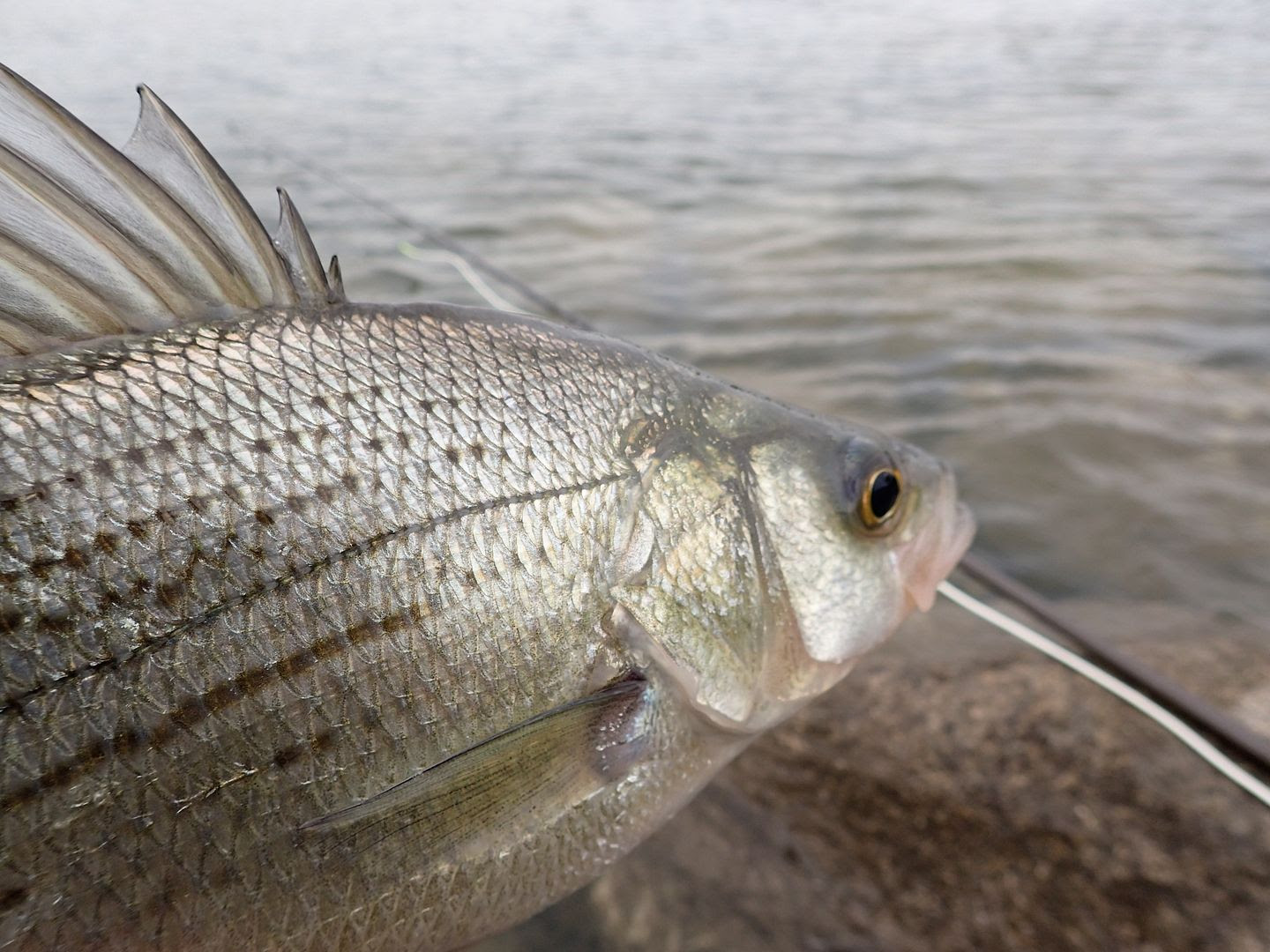 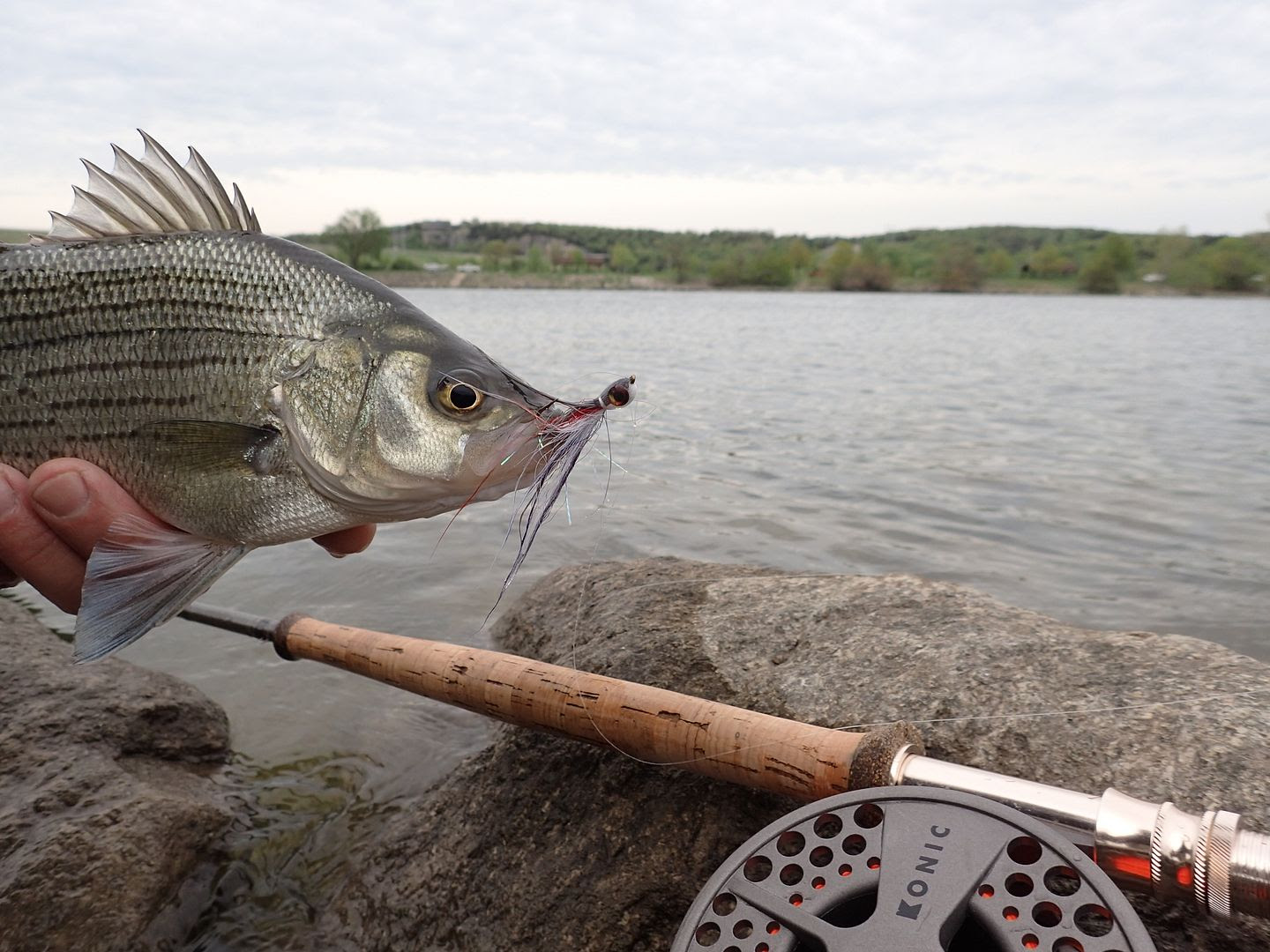 The fishing kind of ran in streaks as the day wore on. It never really got slow but there were some hours that were better than others as is always the case when fishing. I didn't keep track of how many I caught (I'm not a fish counter) but if I had to venture a guess I'd have to say between 60 and 70. I had one streak where I caught 9 fish on 9 casts and another one later in the day where I landed 7 in a row. That's damn good fishing as far as I'm concerned , no matter what species your fishing for or how you're fishing for them. 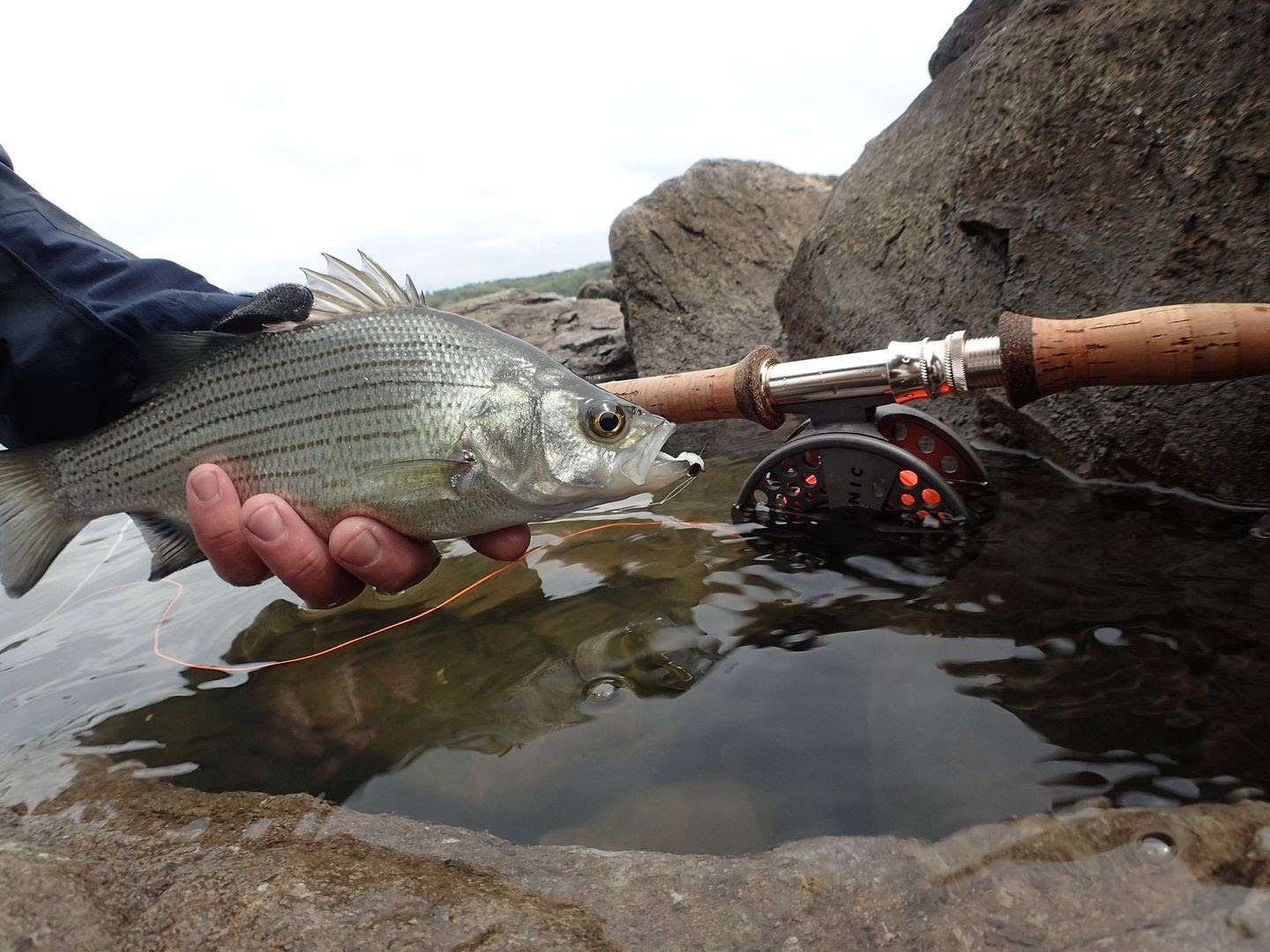 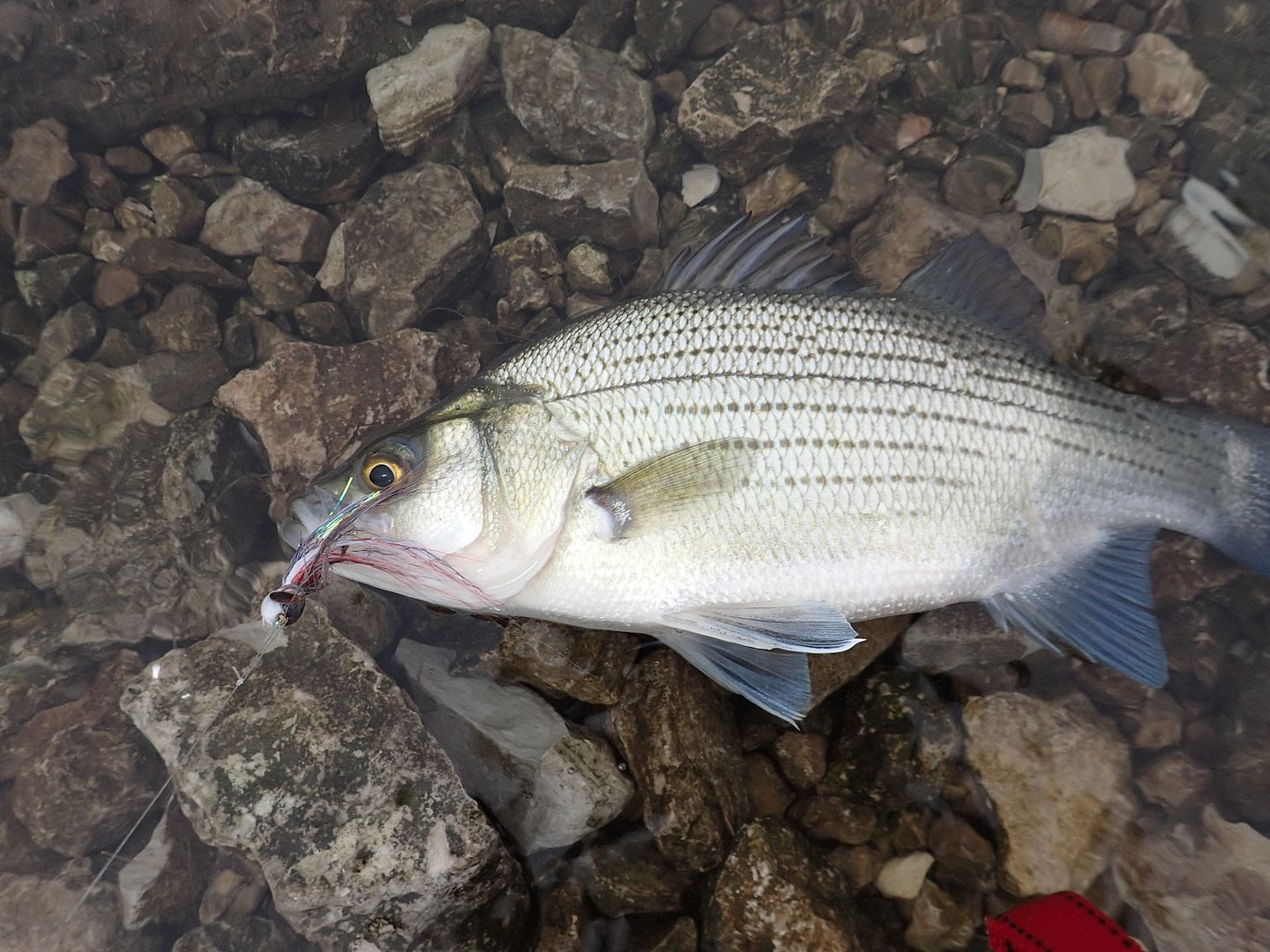 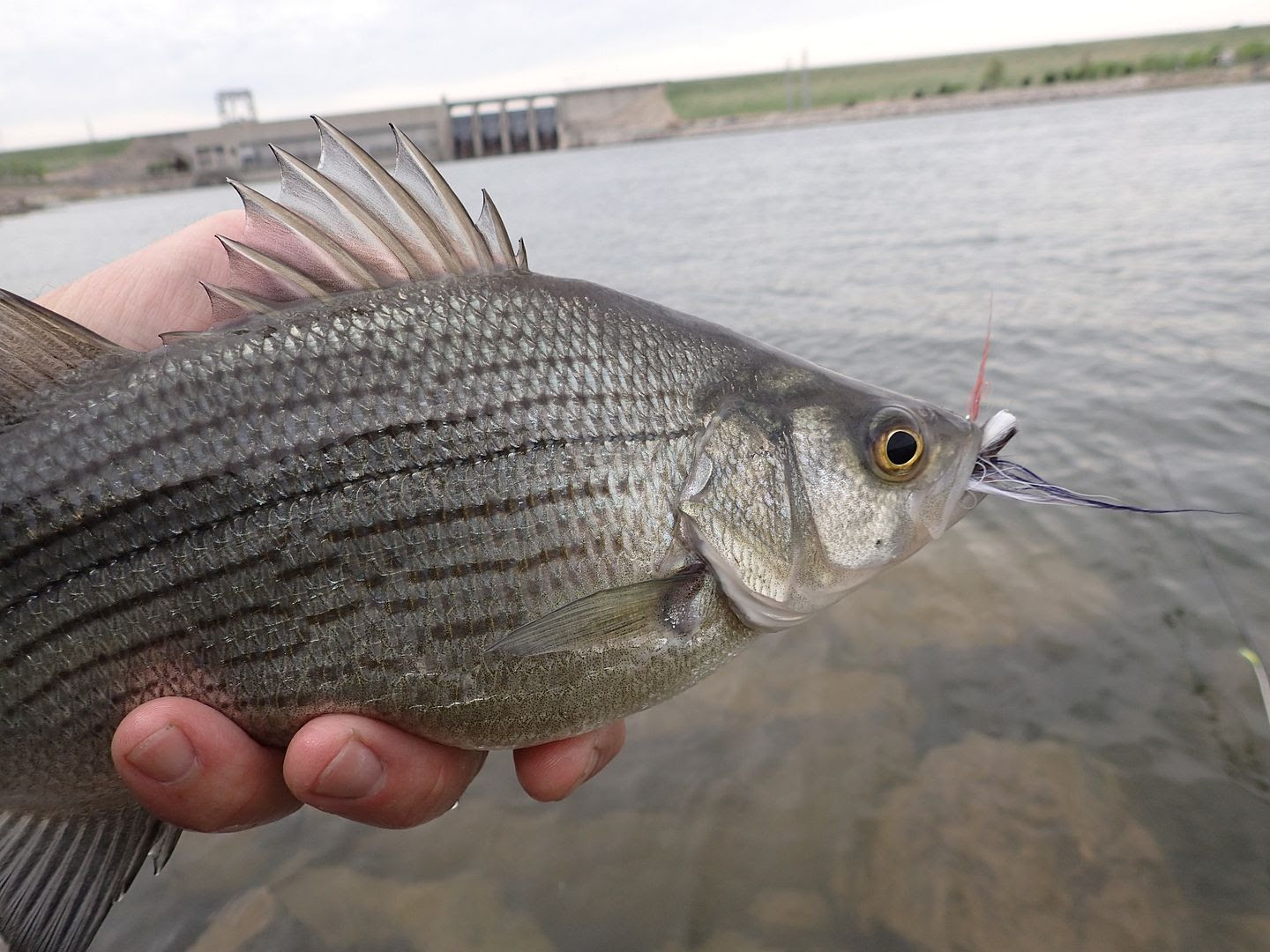 If you've been reading this blog for long you know that I don't miss many meals , even when I'm fishing , but on this particular day the bite was so good I didn't even stop fishing long enough to eat the lunch I'd brought.
The only dissapointment of the day (if you can even call it that) was that I didn't hook up with any hybrids , all of my fish were whites and most of them smaller males if I had to guess. I didn't land anything over two pounds but if you've ever had the opportunity to battle white bass on a flyrod you know what a great fight even fish that size can deliver. 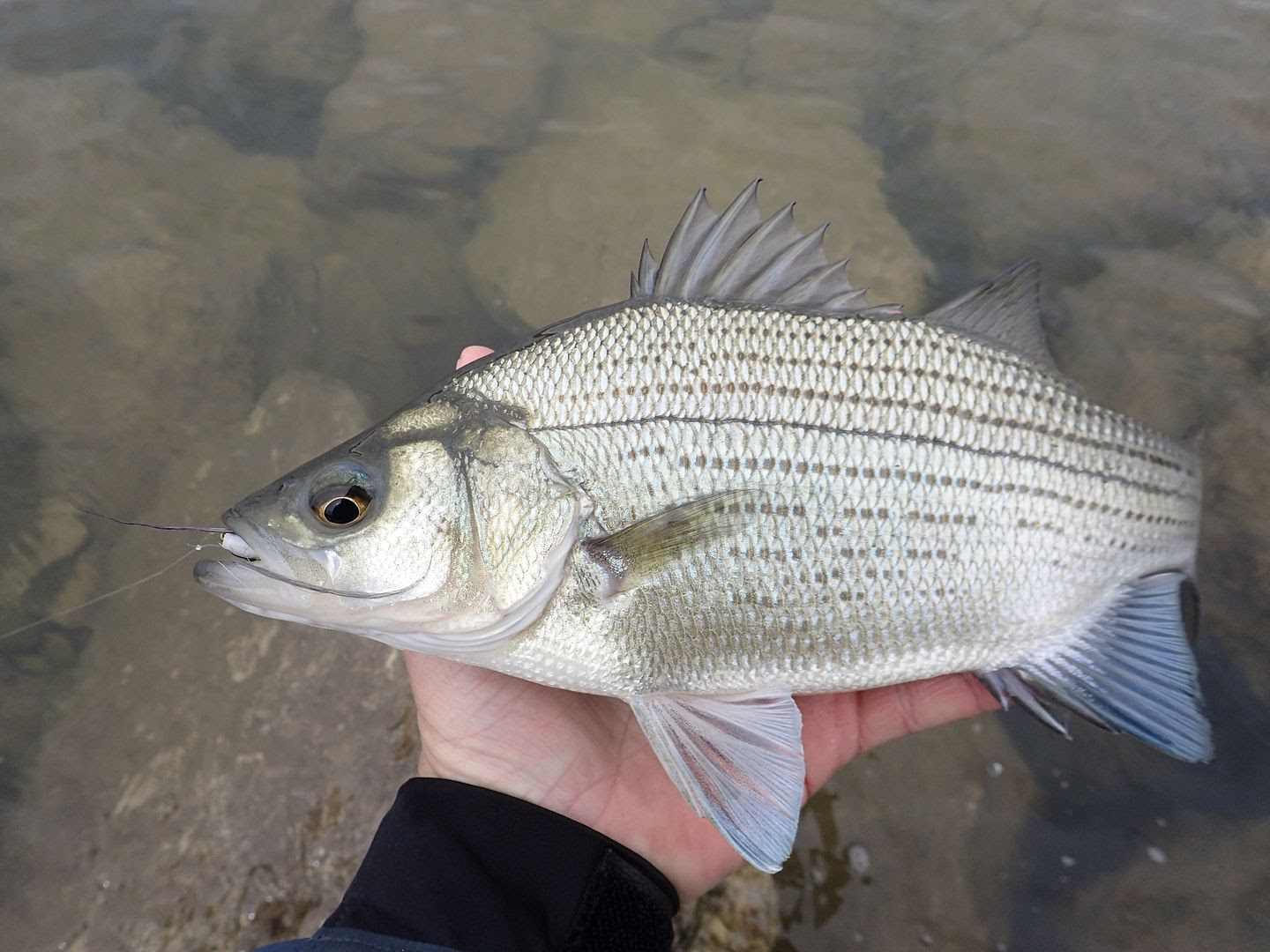 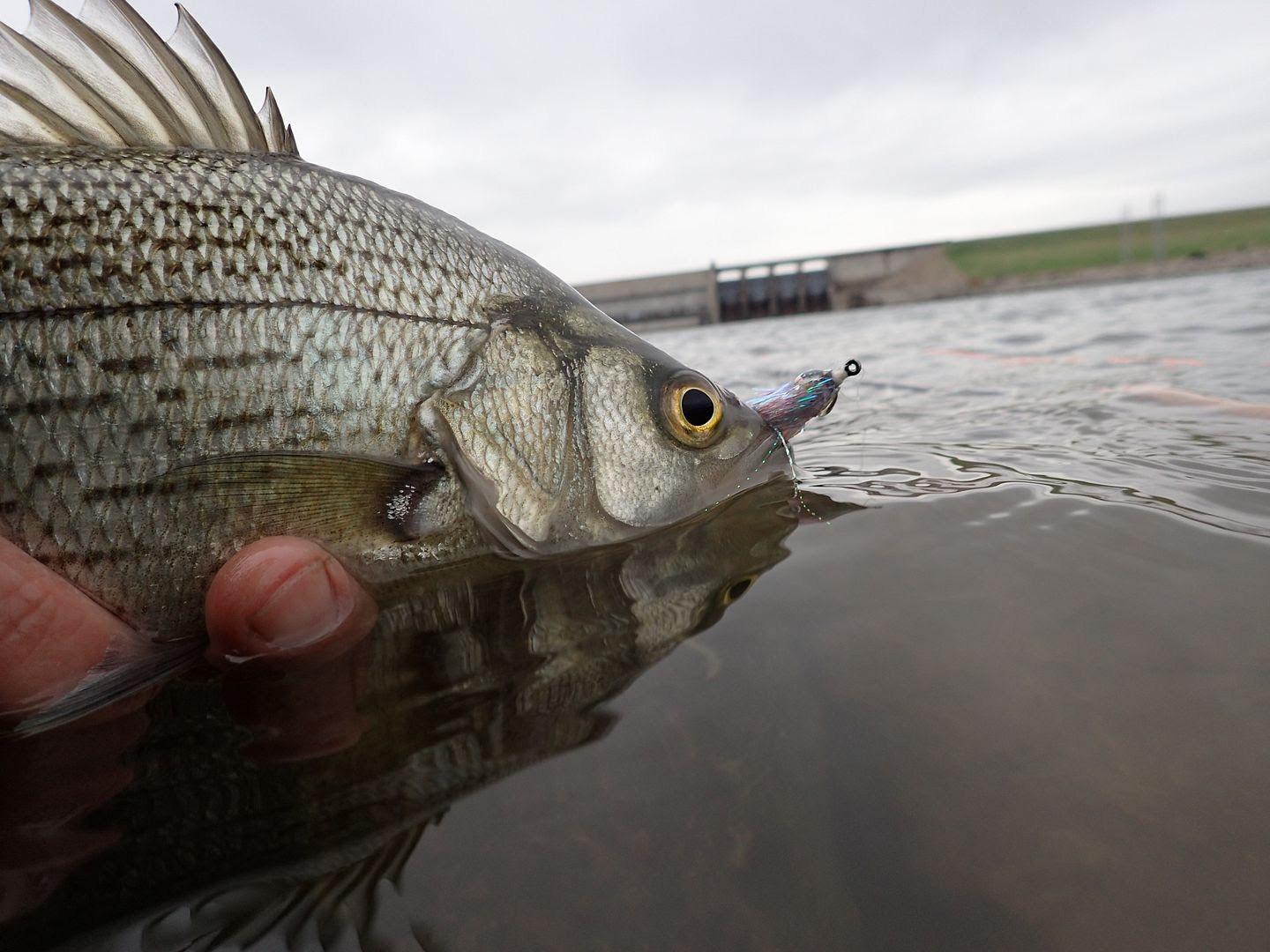 By the end of the day I had major bass thumb and a big smile on my face that even a Monday at work would have had a hard time wiping off. It looks like I can cross that successful white bass trip off my list now...sometimes even a blind squirrel can find a nut I guess! 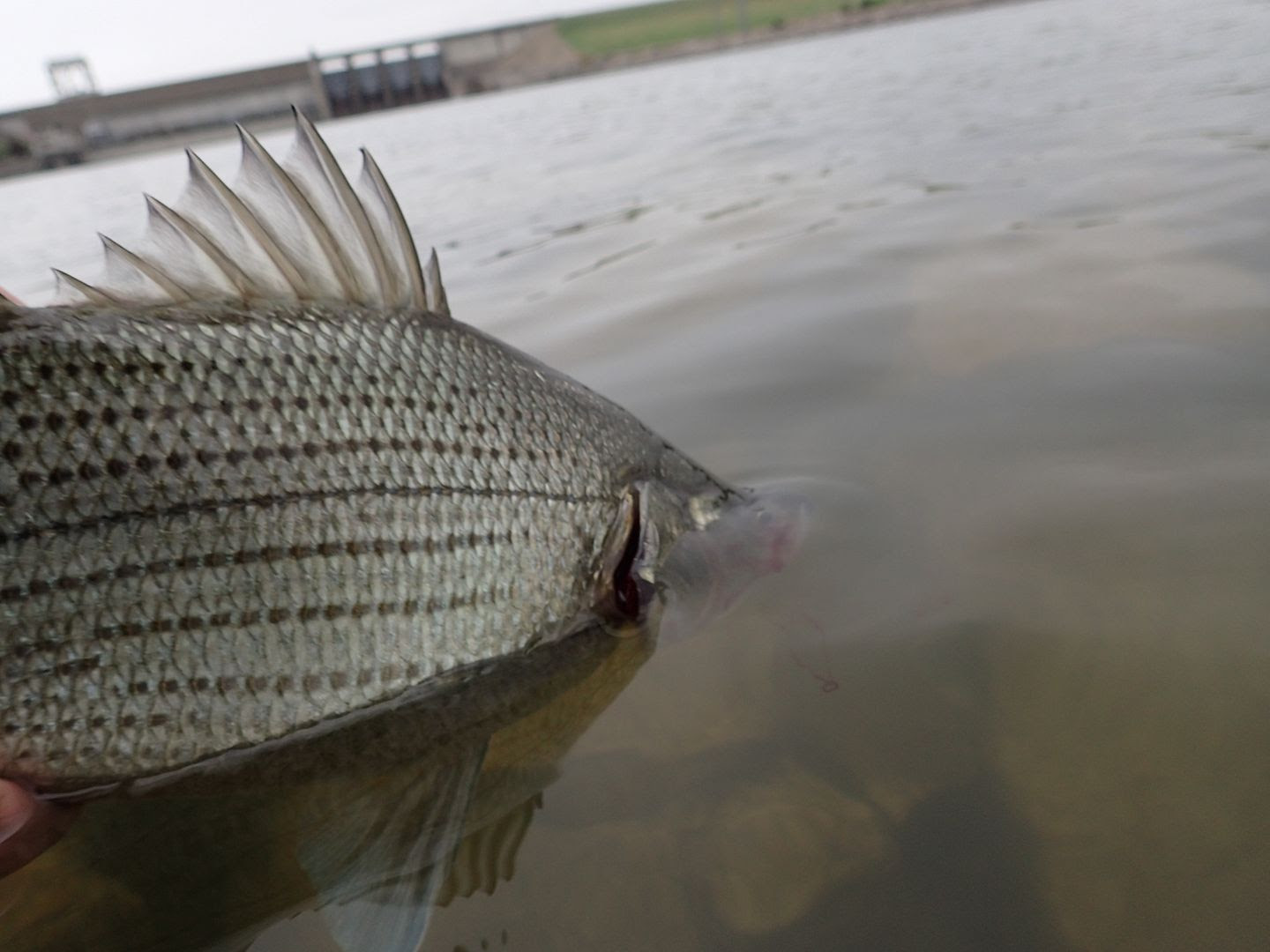